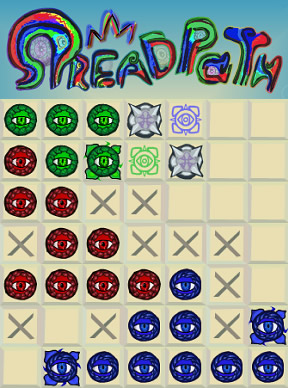 What is growth? Is it the flourishing through upward motion, or is it the expansion through outward excursions? In SpreadPath, a unique new puzzle game by Andrey Shponko (Siglu-Ishlu), we focus our attention on the latter theory. Mysterious creatures thrive not by motion, but by spreading and passing on the task to their descendants. Can you discover the philosophies of this mysterious breed and spread your way to bliss?

In order to achieve enlightenment by spreading, you must cover each target square with a creature of the matching color. Each active eyeball-like creature (indicated by leaves around it) will spread in all four directions (or whichever directions are available) when you click on it or press the [spacebar]. After spreading, an eyeball turns inactive and can't be used again. By spreading through multiple generations, you can create a path to the target.

However, if two or more differently-colored eyeballs attempt to spread to the same square, they will blend and become instantly inactive, forcing a tricky roadblock. To work around this problem, you have several tactics you can use to guide the eyeballs in the direction you want. Some levels come with moveable stones that can block off paths, while others come with bombs that clear already-laid paths. You might need to shuffle bridges around in the water to manually build a path to the targets, or use a portal to get to another part of the level. 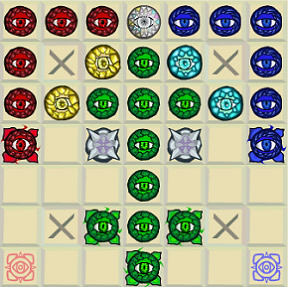 Analysis: SpreadPath is a short but clever take on the Point-A to Point-B with Restriction-C puzzle. The pseudo-ancient philosophical take on the eyeballs' existence makes for some interesting narrative to ponder while playing through the game. If there's one flaw in how the game presents itself, it's the world map which, like in the game, "spreads" to open multiple new levels to play as you complete them. This is a nifty idea, but since you have the power to tackle levels out of order, you might not get the proper tutorial for handling a certain game mechanic until after you've already plowed through it on another level, or the levels might feel like they're jumping around in terms of difficulty.

Order aside, it's hard to pin down the difficulty level of this game. Some levels can be solved with just a bit of foresight and planning, while others take some trial-and-error and exploration to figure out how to correctly guide the eyeballs in the right direction. With a bit of careful play, you can probably plow through a majority of the puzzles rather quickly, but then get hung up on a few toughies.

Wherever your path takes you, SpreadPath is an intriguing challenge to push your logic and puzzle-solving abilities into new territories. Try your hand at the enigmas presented to you, and find your way to enlightenment through spreading. Just be sure to pass on your newly-found knowledge to future generations!

The intro to this review reminds me of the "What is freedom?" intro from the Inquisitive Dave review a long ways back.

I enjoyed this game quite a bit, though the game lacks the challenge to be anything more than a brief (albeit very entertaining) distraction. A few more levels and maybe a bit more variety would make this an absolute winner. The game is definitely on the right track.

I think the level design is pretty spot-on, especially the later levels. The second puzzle in the bottom row was super clever. I'm currently stuck on the middle puzzle in the fourth row.

Got it. Yay, power of posting.