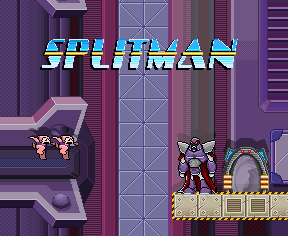 Sometimes, we could all use an extra pair of hands. There's just so much to do around the house: taking out the garbage, washing the dishes, pushing around the giant crate collection, flinging yourself across that inconvenient electrified spike-filled pit in the backyard, defeating the neighborhood evil overlord. Wouldn't a clone be just great? Keybol apparently thought so, and the result is SplitMan!

SplitMan is good ol' puzzle platforming fun, though it could stand to make its explanation of game mechanics a bit more explicit. It's fine for the central gimmick to be that running your character into a saw-blade will split him into two living copies, but, let's face it, that's probably not a particularly intuitive concept. That said, the game succeeds on the strength of its puzzle design and the hilarious taunts of the antagonist. So get to it! There's a SplitMan waiting to be played, he like to come and meet you, and he just might blow your mind!

My main complaint is how a small mistake in how you move can render you unable to finish and you have to restart the level. It gets frustrating.

force fields that block exits can be touched without dying, in fact you have to utilize one in one of the levels.

I know they look deadly, but they're not.

I liked that. An unusual mechanic that has been put to good use. For those that are wondering, there are:

I love that the tutorial is given by the villain of the game :P

I found the complete walkthrough on YouTube and I still can't do level 14. Argh!