If I were a Splitman... (Yubby dibby dibby dibby dibby dibby dibby dum). All day long I'd... Well, I'd probably use rotating saws to divide myself into multiple copies and make my way through a puzzle platforming world. Or rather, that's what happens in Splitman 2, the sequel to the well received original from Keybol. Move Splitman Prime with the [WASD] or [arrow] keys, trying to make it to the exit gate at the end of each level. Whenever a Splitman jumps into a spinning saw blade it will split them in two, then shut down. These clones will follow the movements of the original Splitman as close as they're able, giving you a boost to areas you couldn't otherwise reach and allowing you to push heavy objects. Also, in a pinch, their corpses make good stepping stones on top of deadly electrified spikes. 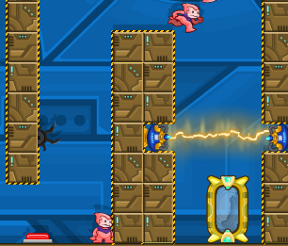 There are 24 regular levels, though six more unlocked if you collect the keycards scattered throughout the game. Later levels will include such wrinkles force fields and black saw-blades that spawn reverse-gravity clones. Though the pixel art of the original is missed, as is the villain's snarky dialogue, Splitman 2 keeps the clever level design that made the original so popular. The game does seem to lag a bit when numerous clones are on screen, which is a definite flaw, but closing the other browser windows seems a small price to pay for addictive action.

You can jump through the top brick of the wall next to the keycard.

I liked this game, went by pretty quickly and wasn't super difficult. I can't wait for more levels.

Only one I truly got frustrated with was level 30. But that's cause it's more of an annoyingly finicky one.

utterly terrible, the ability to wall jump would make this MUCH more playable. having to hope your clone has jumped high enough so you can jump off his head is just not very decent.