Splitgate is a first-person shooter that tries to answer the question, "What if the classic PC game Portal was turned into a multiplayer shooting game?" Let's take a look at how the game is really played. We'll cover the types of modes and features available, along with how to get the most out of this game. 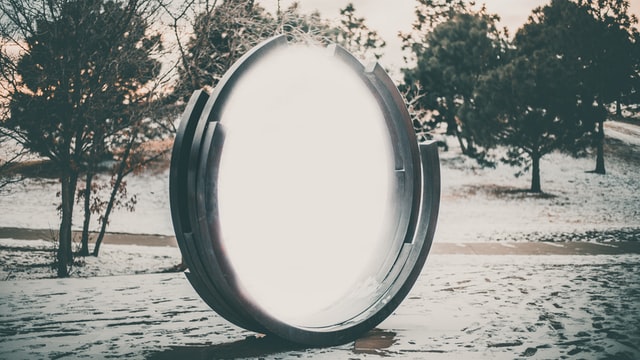 Splitgate is a first-person shooter that tries to answer the question, "What if the classic PC game Portal was turned into a multiplayer shooting game?"

Let's take a look at how the game is really played. We'll cover the types of modes and features available, along with how to get the most out of this game.

Gameplay
For the most part, Splitgate is a pretty straightforward, first-person shooter game. The game supports either keyboard and mouse or controller inputs, and it has all the standard shooter controls for moving, sprinting, jumping, crouching, and shooting. They can be mapped to any key you choose in the settings. There's also a jetpack double jump control that lets you get a bit higher and hover for a couple of seconds.

Splitgate's most unique characteristic is that your character can place a portal on special surfaces on each map. You'll have to place a "left portal" and a "right portal" in order to complete a full portal that your player can move through. Your character also then has the ability to close a portal. This can be important since your opponents will be able to come through the portal after you if you don't close it.

The portal mechanic can seem a bit daunting at first if you haven't used it before, but the game comes with a reasonably detailed tutorial that it asks you to work through before playing an online match.

Inside the game, the portal mechanics provide very creative possibilities. For example, placing a portal from a lower level an upper wall can give you a sniper viewpoint that is not built into a level. It also can allow you to "fall" to parts of a map that might not be accessible if you had to rely solely on jumping and running. Your opponents have portal abilities, too, which can make the game feel a bit frantic.

Game Modes
Splitgate comes with a variety of game modes. When you start, you're only allowed to play in Casual, and a limited number of modes will be available to you. As you progress (more on that below), you can unlock Ranked mode, Team Rumbles, and other game modes. Here's a quick summary of most of the game modes that you can access right off the bat.

Team Death Match - 4 players versus four players, and the first team to 50 kills wins.
Team SWAT - Same as a Death Match, but headshots are instant kills.
Team Shotty Snipers - Same as a Death Match, but only weapons are shotguns or snipers.
Team Oddball - Try and steal the Oddball (a giant disco ball) and keep it away from the other team.
VIP - Each team has a VIP who is harder to kill, but the VIP cannot use portals
More modes become available as you advance through level 10 and then level 20, giving you access to Ranked Mode.

Along with the various multiplayer modes, there's a series of single-player training modes. One of these is the Tutorial to replay. Another is the Practice Range, where you can test out different weapons and play around with your abilities.

The training mode that is the most fun, and the one that will help you improve your skills with portals the most, is Race. This sets up a series of balls around each world. Your objective is to run to each ball as fast as you can. If you use your portal ability to its best extent, you can make it around the world to the balls the fastest. The game shows the best times that other players have posted. It's pretty fun to see how you measure up.

Weapons
There's pretty much the standard run of weapons available in Splitgate. Here is a quick summary of the most common options you'll find:

Carbine - a semi-automatic rifle with medium zoom ability
Assault Rifle - fully automatic rifle with limited zoom
Battle Rifle - fires bursts of bullets relatively quickly
Shotgun - shoots a blast that is good for up-close combat
Sniper Rifle - Long-range zoom and heavy impact for long-range combat
BFB - The Bs stand for "Big" and "Bat." You can fill in the F.
Railgun - charges up to shoot a powerful blast.
Pistol - Semi-automatic that fits in one hand.
SMG - Short for "submachine gun." They shoot a lot of bullets fast
Plasma Rifle - Shoots a plasma blast
Rocket Launcher - Launches rockets. Careful you don't blow yourself up.
Each weapon is also customizable, with skins that you can acquire as you play through the game.

Maps
There are 14 different maps to play on. Each has a bit of its own character and a unique layout of portals, weapon spawns, and other features. The terrain and textures are varied as well. Playing and mastering them all will take a long time, which means you can enjoy a Splitgate for a while.

Progression
Like most free-to-play games, Splitgate tracks your progress as you play in a couple of different ways. The main one is your experience level. You earn experience points (XP) in each match depending on your performance. As you pass certain thresholds, you can unlock specific cosmetic options or other game modes.

There's also a BattlePass system that will unlock as you go and allows you to equip various cosmetic upgrades or other boosts as you earn BattlePass points. You also earn Drops as you go along for completing challenges. With these Drops, you can acquire other upgrades like weapon skins or costumes for your character. Typical bonuses like playing every day or completing a match can enhance your progress too.

Final Thoughts
Splitgate is a great gateway into the first-person shooter genre. It's definitely worth your time if you're thinking of giving it a try. It has some fun upgrade options and lots of variety for game play. You can have a blast trying to master setting up portals and taking out your opponents at the same time.