Folks, we don't want to frighten you, but we felt you all needed to be warned. The kitties of the Internet... are in danger. Horrible beasties known as spiters are rising up out of the underworld and are taking kittens hostage. If you don't do something immediately, our favorite time-wasting videos and image macros might go away... forEVER! Luckily, Alex2Dio has provided us with the perfect vehicle for taking them on: Spiters Annihilation 2, a physics puzzle game loaded up with all the rocks, bombs, ice cubes, and pits of horrible fiery death you'll need to destroy those spiters. Sometimes you'll be clicking to drop stuff from a specific height, a la the Cover Orange series, to smush the spiters. Other times you'll be clicking to remove stuff, so the spiters fall into something unpleasant. However you do it, just make sure to bid "good riddance" to all those spiteful spiters... and don't hurt any kittehs along the way. It won't be an easy task. ...No, really, it won't. Spiters Annihiliation 2 is a surprisingly devious puzzler that wants to do to your brain what you do to the eponymous spiters! The game relies on a mishmash of well-known physics-puzzle tropes, so it treads familiar territory for those who have been around the physics-puzzling block. It's not quite "new", but the various elements do work together nicely, in a peanut-butter-and-jelly way. Rather than innovate in gameplay, this has put in real love and effort to make its levels truly fiendish. 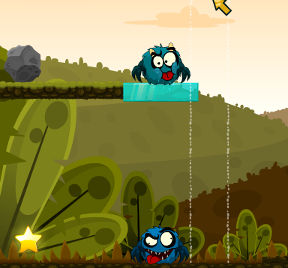 The large number of actions you can take in each level, and the choice between adding new objects or removing old ones, means puzzles are rarely straightforward. The physics can be rough, and they often demand you be very precise with when and where you drop certain items, or set off certain gizmos. But they're almost never the reason you'll fail a level. Later levels even introduce enemies who actively know how to evade destruction, meaning you have to figure out how to trap them before you can smash them! Thankfully, although the game definitely wants to stump you, it doesn't want you to get stuck. There are always at least three levels open at any time, meaning you can hop between stages if you have too much trouble with one. All levels also include an "easy mode" version which acts as a tutorial for how to complete the level normally, and the three stars placed in each "normal mode" level serve as a kind of guide as to where you should drop or push certain objects to. Some later levels do include cats for you to save along with spiters to destroy, but those will still let you pass even if you "accidentally" happen to let off a bomb near the kitties. They have nine lives, right? The whole thing is tied together with charmingly voice-acted and chuckle-worthy cutscenes about the fear you, yes you, are instilling in the terrible spiters, what with your kitten-saving ways. For physics-puzzler fans looking for a challenge, Spiters Annihilation 2 is a hilarious mental workout.

The play button link has a typo. (The link in the text works.)