Spiral Drive takes its notes from the heyday of games like Starcraft and Alpha Centauri, blending space-based sci-fi action and a thoughtful, accessible control scheme. This real-time strategy game by Nico Tuason puts you in charge of a fleet of beautifully rendered ships, having you maneuver, combine and separate them to defeat an array of evolving foes. Hardcore strategy fans will find the game somewhat quaint. There's only one ship type for the main campaign and units build automatically. On the other hand, this allows you to focus your attention on the various flanking and capturing tactics you'll need to seize victory from the jaws of defeat. Simply select a contingent of ships with the mouse and move them to each space station, capturing them (and frequently losing and recapturing them) and choosing the best time to strike. Think of it like real-time space checkers with an awesome look and great soundtrack, perfect for any strategy aficionado wanting to conquer the universe during a few lunch breaks. 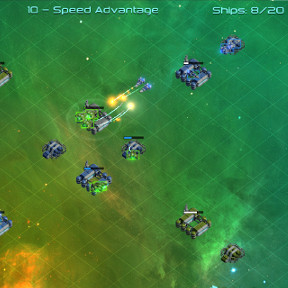 Spiral Drive has a slow movement speed that might feel constrictive for the first few levels. But rest assured, the challenge ramps up steadily, and around the midway point you'll be begging for the earlier levels where you had more time to plot out each move. The enemies' tactics and units are always evolving while you're stuck with your basic ships, watching yourself gradually get outnumbered, outmaneuvered, and outgunned. It's player skill that makes or breaks you here, not economics or hotkey wizardry. As said, this might be best for casual strategy fans, but the later levels will get you sweating, guaranteed. Add to all that a fantastic Starcraft-esque soundtrack (available for download, by the way) and some sharp, lag-free isometric visuals and you've got a fiendishly addictive and satisfying experience. Divide, combine and conquer. Spiral Drive lets you do it all.

Great, the AI always flies past the stations they mean to capture and stay in empty space! So they become easy targets like a lame duck!

But wait, this makes the game totally boring and pointless :-( Oh my, can't the game developers test their stuff before releasing?

Do the levels get progressively harder? Sure, that's fine. But level 25 is IMPOSSIBLE. I have tried twenty times, and no strategy has been successful for more than thirty seconds before I am overrun.

Try to take a production unit? Two teams fly in and eat you alive. Try to hunker down and build troops? The red team chips away at your storage units while the yellow team destroys your fighters faster than you can make them. By the time you have two units, every other team has six (or twelve for red) so launching a quick assault in any direction is impossible.

Until the game changes or someone comes up with a strategy, I give up.

Here's a strategy that worked for me on level 25:

Step 1: don't move till you have more than 10 units.
Step 2: if one enemy launches an attack on another enemy, attack their original base with all your units. Since they have a low maximum number of units, they will hardly have any defence. Make certain that you quickly capture the 2 housing structures, so they will not be able to make new units (they'll have a maximum limit of 0).
Step 3: rush back to the centre, to reclaim any structures you might have lost during step 2
Step 4: slowly expand, maintaining your original centre base and your newly captured base

Well, that totally didn't work on the first try ... heheh I feel dumb.

One small exception to step 1:

Hold on to your storage units. If you loose one, move 1 or 2 ships to recapture it. The ships might be destroyed, but the storage units are more important.

Yellow: Fires two rockets instead of one
Green: Fast moving

But what about the deep red and normal red. What special advantage do they have?

Anybody got any hints for level 17?

You are faster than the yellow ships. Take first 2 ships and build a factory and a storage thing. Take over the left 2 columns as quick as possible, then move to the factory at the top of the screen with all your guys. As soon as you've taken it over, move to the next factory on their side and send one ship to take over the storage areas.

I lost my original bottom factories, but was able to keep my main army taking them down while i kept a reserve to hold off the 2nd column from the left factory

Even with this strategy, took me 5-6 times to succeed.