Spike: A Love Story, Too 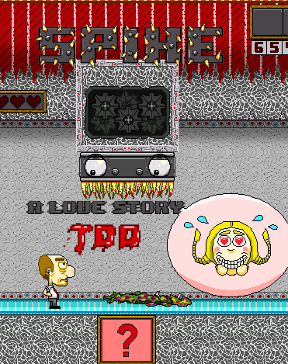 You know those old Flinstones cartoons where they would show a bored looking animal being used as an appliance? Some beleaguered boar under the sink being used as a garbage disposal would look at the camera and quip, "It's a living"? Well, Mike Houser's arcade reflex-driven game Spike: A Love Story, Too is like that, only squishier, and with an undercurrent of vague ickiness. As a lowly spike trap like so many others, you're just coping with the day-to-day drudgery of crushing players and helping keep the monster population down, all while trying to keep your job security high by meeting your quota. Good thing you love what you do, and what you do is render things into a fine paste... especially if it gives you the chance to see your beloved game mascot!

Hit [spacebar], [X] or [L] to drop down and crush anything underneath you, nabbing coins for a score bonus and power-ups to help you out. On some levels you might have to keep the monsters in check by only crushing specific ones, and on others you might have to be even quicker on the trigger to take down wily, experienced players. Just stay sharp and watch out for fireballs! While the actual gameplay hasn't changed much beyond the original game and the story is sort of a one-off gag, Spike: A Love Story, Too is still a fun, silly example of a developer expanding on a simple concept in clever ways. The main problem is that while the game makes an admirable attempt to introduce new twists in each level, sometimes those twists and concepts aren't adequately explained and wind up requiring some experimentation. Still, if you're looking for a simple, twisted little game with tongue planted firmly in cheek, Spike: A Love Story, Too is a weird, fun, and gleefully gross concept with an unusual protagonist, and sort of makes you wonder what other nefarious game traps could get their own installments in the future.

Play Spike: A Love Story, Too

Okay, question. Sometimes when I smash, coins (once a mushroom) come out. How do I collect those?

It freezes up on the fireball level (3) in both IE8 and the latest version of Chrome. The level starts okay but at some point the victims stop coming out. I can still operate the spike but nothing else happens.

I keep getting fired with like 50% job security. WTF?

".....sometimes those twists and concepts aren't adequately explained" is so very true.

Is everyone in the level a reviewer? How do I tell reviewers from non-reviewers? More instructions, please!

its good but no save point :(

the trick is to

try to smash as close to them as possible WITHOUT actually hitting them. They want a good show, but cannot write a good review of the game if they die.