In an ancient dark cave, lit only by the luminous glow of fireflies, a war approaches. The Flies don't stand a chance against the bloodthirsty might of the Spiders. Caught in the middle of this conflict, your allegiance is divided. You must find a way to escape this place if you plan to survive... In Martin Petrini's platform game Spiderling, you play a surprisingly adorable critter with limited web abilities trying to traverse caves. Move with the [arrow] keys, jump with [Z], and use [X] or [shift] to shoot webs. The game's central mechanic involves using your web strings to swing across chasms. This involves holding the up [arrow] along with the direction you want to go, then pressing and holding [X] to latch onto the ceiling. You'll hold on to your webbing as long as you hold the [X] key, so don't let go until the right time. This isn't Spiderman—rather than swinging gracefully like you would on a taut rope or vine, you'll need to let yourself bounce on your web, then let go of [X], using the momentum to propel yourself forward at the perfect time. 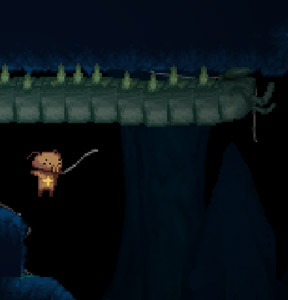 Don't give up, swinging is actually quite easy to do after some practice, but the most difficult part is getting your web to stick in the first place with careful timing. Barring the fact that the brief in-game tutorial doesn't explain this important mechanic as well as it could, Spiderling really uses the webbing mechanic to its full potential. Though a few of the puzzles are quite tricky, the game is forgiving and has many checkpoints. The striking visuals and ethereal soundtrack truly make this a work of art. The large variety of creatures you see scuttling or floating around remind you that this is part of a world! The characters are bursting with personality for such a short game, particularly the spiders, who are genuinely terrifying. Certain hidden items can also be found by using the down [arrow] and [Z] simultaneously to dig under small piles of stones. These secrets are completely unnecessary for completing the game, but provide compelling hints about the game's exceedingly well written lore.

Spiderling's final "boss" is rather anti-climactic, but the game's ending is both rewarding and heartwarming. If you are at all interested, give yourself an hour to play this game to the end. As this is apparently episode one, we can hope to see more of this beautiful, bug infested world in the future.

I need a tutorial.

Unfortunately it is unplayable with a non-US keyboard since jump is mapped to "Z". I can not even pass the second "jump" tutorial screen because I can not switch between pressing X and Z fast enough without getting a knot in my fingers :-(

Casparne: I'm sorry that the game is unplayable for you! Such is the drawback for games which do not allow for key re-mapping. :(

jcfclark: There are definitely some tough puzzles here which require you to think outside of the box. Luckily, the developer has provided a video walkthrough here. If you'd rather not sit through it, you can ask specific questions here and I'd be happy to offer hints!

I really enjoyed this game. The character graphics were unique, the music was cute but not annoying, and the learning curve on the controls was well paced.

I found three things, though, that made this game less of a memorable experience than it could have been:

1. The story was pretty bland. I was actually surprised at this, given the quality of the aspects mentioned above.

2. The direction you were supposed to head in was unclear. Not such a big deal if you can double-back. But in this case, it was possible to cut yourself off from being able to double-back. This meant that I had to start the whole thing over a couple times.

3. There was no option to skip the cutscenes. I understand that the wording was paced to convey the tempo of the characters' speech, but it hugely decreases the replay value.

Oh, great!
The good old "everyone in the world uses a QWERTY keyboard" way of thinking.
Unplayable for me this way.

Had to look this one up so I could say this right...

This game has a few bits of negative possibility space, and the biggest one is the secret treasure things. They are there, you can collect all 6 of them in a single run, and your reward for doing so? Getting to see all 6 of them. That's it. Kinda disappointed by that one.

That, mixed with the control issues mentioned above, kinda gives the impression that this is a game with well-polished visuals and gameplay that might have really benefited from a bit more polish in other aspects of the game as well. A good game with the potential to have been better.

Also, in regards to the QWERTY bias in games: have you considered something to the effect of buying a controller that has mappable buttons? It's not exactly the optimum solution, but you could have a control mapping that would allow you to play games that lack the control scheme options you would otherwise need. An example would be a classic x-box controller and x-padder.

Best Spiderman game on the internet. Really hope they do a second chapter.

Mutevampire, I agree that it's a disappointment when you collect all six items and get nothing for it. Still, the items said a lot about the world of story behind the game.

That spider lady picture ("reminds me of mom") really made me wonder what the backstory of the spiderling is.

Thanks JoelyBean, the walkthrough helped. As Montante said, I got stuck by taking the wrong road and had it not been for the help, I'd probably still be wandering around the cave. Excellent atmosphere and graphics; the mechanics took me a bit longer than usual to use effectively.

About the keyboard layout issue: while I agree that game designers should think more about the fact that not everyone uses the same keyboard layout, also remember that every OS available these days has switchable keyboard layouts! You can set your OS to a US keyboard to play the game, then back to whatever you'd been using. Check your OS's documentation for how to do this. No need to spend money on additional hardware or software.

Marnen:
I'm well aware of that.
But switching keyboard layouts for a quick flash game has proven to be a bit tedious so I refrain from it. :)

I wish the "you have to put the 2 gold-thingys in middle of door by jumping there" (2 times) part had been explained... oh well.

AWFUL key layout & mechanics, this MIGHT be vaguely playable if up were jump. And that shot/swing were easier.