Worry not, arachnophobes! Despite her name, Spider the Fox is 100% all vulpine, all the time. And she's about to embark on the, dare we say it, feel-good adventure of her canine lifetime to grow her very own floating sky-island that she can call home. Developed by E & E Games, with art and characters donated by Megan Turner, this sweet little exploration game tasks you with gathering seeds, planting and climbing crazy vines, and chatting it up with adorable and amusingly-named animal locals as you complete your, in Spider's own words, "sorta coming-of-age story." And while you can play with your keyboard, using the [arrow] keys to move, the [spacebar] to jump, [E] to talk to people, and [F] to plant the vines that will let you reach places too high or far away to jump to, her Bildungsroman also has XBox 360 controller support! Cheery, cute, and surprisingly poignant at times, Spider the Fox is a sweet but not saccharine journey that's also got a pretty satisfying destination. 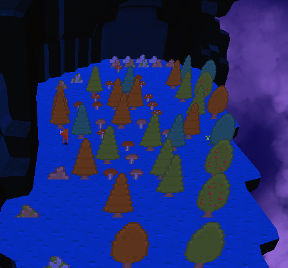 When you break it down, Spider the Fox is a fairly simplistic game. You have to find the four Home Seeds that will allow you to build your island, which you do by exploring the floating 3D worlds drifting through your dreamy skyland. Your only real ability for the majority of the game is planting vine seeds, which cause vines to automatically appear wherever you walk or jump and which allow you cross gaps or climb higher. And while you can talk to the various NPCs you encounter, most of the things they have to say are incidental and are only there to provide flavor and atmosphere. But what flavor and atmosphere! The dialogue in this game brims with charm and has plenty of chuckles to offer. The story this game weaves may be small, but it and its characters are tight and involving. And while your main goal may be easy, just about every object in the game can be touched to grant you extra seeds, which you can use at the end of the game to really make your new island feel like home. It's a lovely little reward for finishing the game, and it puts tangible value to all that extra running around and exploring you have to do. The exploring itself can sometimes be a little rickety; platforming in a 3D world with a 2D character is tricky and slippery, and the environment graphics do become awkwardly see-through if you happen to get behind them. But the story and world are so big-goofy-grin pleasant that it's easy to overlook the technical flaws. It's also nice to see a game that makes beating it truly rewarding. Spider the Fox is as sunshiney as games get... even if the sarcastic protagonist might roll her eyes at us for saying so.

So no version for Chrome?

Games are not built for specific browsers. What happens is that Chrome stopped supporting several plugins, including Unity's. But I suggest downloading it. I played for a while on firefox and it's not as stable, the game is large and processing intensive.

Ah, sorry, I missed the sarcasm :)