Graduation time at Spellwood Academy! Biggles the bespectacled bunny wizard is ready for finals, but unlike most school exams, these happen to be quite entertaining. Spellwood from Three Rings (creator of Yohoho! Puzzle Pirates) drops you in a cheery fantasy world of one-on-one word battles, allowing you to face off against opponents in turn-based tile combat. Think of it as Scrabble meets Puzzle Quest with wands and anthropomorphic animals and you'll have a good idea what to expect! 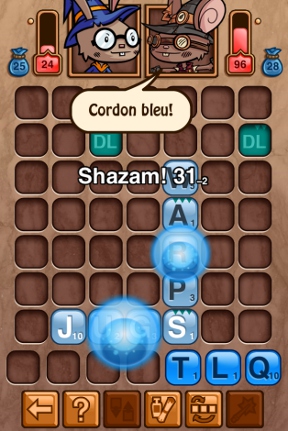 Everything you need to become a dictionary wizard can be found on an empty board with a handful of letter tiles. Battles take place on a 7x7 grid with you and your opponent taking turns spelling words. Each tile has a point value that translates to a damage score, with more difficult letters offering bigger numbers. Simply drag a tile to an empty space, form a lovely BOOT or HARANGUE, hit the wand button and cast the spell. Words are magically converted to damage which lowers the other player's hit points. Reduce your opponent's HP to nought and you'll be one step closer to proving yourself!

Completed words don't stick around forever, so you don't have to worry about leaving space for words a dozen moves ahead. You can, however, work with your opponent's next move in mind, forcing him or her to use awkward letters in tight spaces. Bonus spaces also appear on the board, such as the familiar double letter score, which can be used both against your enemy and against yourself. Later on you even get to carry around a few tiles to place, which will be necessary once those crafty animals start showing you up. 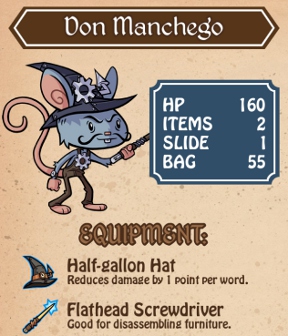 Analysis: Spellwood is a pleasing combination of word game, puzzle game, and extremely light RPG. Not only are you concerned with making words out of a limited set of letters, you also have to think about how much damage they'll deal your opponent. Stats and items are kept to an absolute minimum, allowing you to focus on the game at hand. There are a few pieces of equipment to fiddle with, including your opponent's arsenal that may or may not contain game-changing items that will be worth taking into consideration.

Spellwood doesn't emphasize longer words over shorter ones, which is somewhat rare in the word game genre. You aren't punished for spelling things like AS, HA, or NO, you just don't deal as much damage, which simply slows down the battle. It's a good feature that takes some of the pressure off of each move, and since you always seem to have a crummy set of letters on hand, you'll need to use that bag of stubby tricks more often than you'd think.

The dictionary in Spellwood occasionally allows strange bits of slang, causing a raised eyebrow or two when you see the things your opponents (and you) can get away with. It also includes some moderately non-family-friendly phrases, many of which the computer AI will actually play on occasion. Nothing offensive or crude, but possibly words that would be cause for a few conversations if a young child came across them.

When you need to prove how awesome you are at words, Spellwood is a great place to start. It's got a fun, challenging atmosphere that offers a few power-ups to liven things up but never strays too far from pure word-on-word battles. It won't be the end-all word game of word games, but it's good for some casual play now and then.