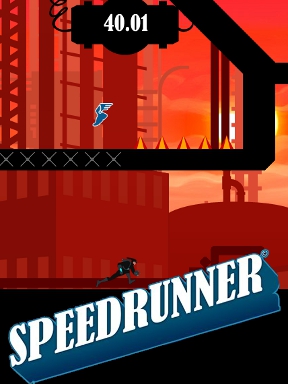 Bomb squads are for suckers! Double Dutch Games knows that when danger strikes you don't call the professionals, you call a guy who can run fast!... like... really fast! Speed Runner is a timed arcade platformer about the titular hero's goal to track down and dismantle the bombs planted all over the city and deal with the villainous mind behind it.

Use the [arrow] keys to move, and [Z] to jump. Every stage except "boss battles" has a time limit related to a bomb planted somewhere in the area; your job is simply to avoid hazards and reach the bomb in time to dismantle it (even a split second is enough, so don't stress) before you get blown to that great Fortress of Solitude in the sky. Make sure you avoid any hazards, since Speed Runner is apparently super fragile and a single hit forces you to restart the level. Speed Runner is initially only able to do one thing; run really fast. However, as the game progresses, grateful scientists will provide you with more equipment to let you use different abilities, like a grappling hook to swing past danger (controlled with [X]), or a special glove that lets you cling to walls and leap off them. During boss levels, you'll have to use all the tools at your disposal... to... um... run away. Uh... you're my hero, Speed Runner? *sigh*

If you don't do well under pressure, Speed Runner is not going to be for you. Your jumping height largely depends on how much speed you build up, and sometimes all it takes is a hesitation or missed step to mean the difference between hitting your target or falling onto the bed of spikes below. It was enough to make me wish in a few places that the game would simply let me skip a level if I died too often on it. Especially during the boss levels. Which, speaking of, sort of makes me wonder why a super villain is bothering with easily disarmed bombs when he has giant death vehicles the size of covered with buzz-saws lying around. (Bro, Dr Octopus thinks you're overcompensating.)

The whole thing has a wonderful Golden Age comic book vibe to it, however, from the character design and cutscenes to the gameplay and missions themselves; remember the days when every other super villain would just plant a bomb under an orphanage and call it a day? The gameplay is fast, breezy, and easy to pick up despite the challenge it represents across its handful of levels, and I can't help but feel it should have a narration throughout from Adam West or Townsend Coleman. While there's admittedly only so much you can do with a superhero who relies heavily on gadgets without turning him into a sprightlier Batman, Speed Runner is a concept I'd love to see expanded upon and developed more in the future.

Still the same mistake: Game developers, please don't forget than foreign keyboard keys aren't the same. z = w for me.
It's unplayable.
Why don't just use the 4 arrows keys and the spacebar ?

I love the whole thing! The gameplay itself could be more fluid, specially the wall jump

Hi there!
You can click on the controller icon in the top right corner to adjust the controller settings, so you can use space, wasd, or whatever you like.
Cheers!

Ok, you're right. Sorry about that. I did'nt see the controller icon.
It's a good game.

I want to love this game but the walljumps are just too clunky. It really detracts from the rest of the game.

Thanks for the feedback guys, too bad you're having trouble with the walljumps; it's an issue I hear a lot..

I'll make sure to improve it in the Xbox Live Indie Games version of the game, though! :)

On the level where you're running upwards, the shaking screen is too distracting.

Okay, I'm really sorry, and I see this game has potential, but I am forced to quit on "The Escape" The unnecessary "glare" of the sun mixed with the spinning blades and shaking screen slow the game down to about 3 frames per second.

Really fun game, but very short :-( The site-locked bonus levels would have been fun if, you know, they weren't site-locked. But, you know, I guess developers gotta eat! :D

@Casper
I actually didn't have any trouble with walljumps. Great game! I wish you many games and code that behaves itself ;-)

This game's very fun but very short, I mean I've never seen a game before have only 10 levels (minus the site-locked ones)! I don't think, t at least.

Also, the review, it says the villain has giant death machines the size of, then goes into the next detail, and I doubt all that these monstrosities are can fit into the space between words. Please fix?

Eh, it was fun, until I saw that the last 10 minutes of unlocking stuff, finding pickups and getting golds was wasted because I am not playing on maxgames.

I guess I will just not play and downvote every single game that does this. This super-annoying malicious practice just needs to die. Just don't publish your game if you don't want the game to be played on other sites and disable it entirely on other websites instead of giving other people some crippled half-playable version.

ah i cant pass the challenge stage anyone can help?