These days, projectile puzzles are a dime a dozen. But does any of them have a lion prince protagonist? Does any of them dare to use pop culture references from 300 and The Lion King? I think not. In Spanthera, we get to meet prince Leonidas as he goes on a heroic quest to rid his land of intruders led by the lizard equivalent of king Xerxes. Unlike the real Leonidas, the lion version fights almost all alone, with the help of his mighty spear. The goal in each level is to kill all the lizards without hurting the civilians. Move the mouse to set the height and power, click to launch the spear, shut your eyes tight and hope for the best. The thing to remember is that the spear will kill lizards only if it hits their head, but lions are more fragile and will die no matter where the spear gets them. Also, the spear appears to be very sharp indeed, so there's no need to chuck it with a lot of force; instead, focus on precision. 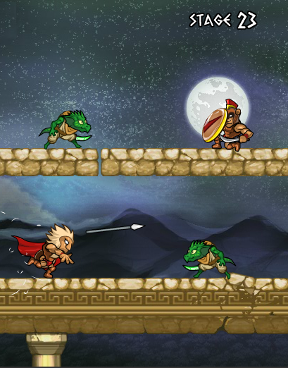 When making a projectile puzzle, it's tempting to introduce as many elements as possible in order to keep the gameplay fresh. Spanthera, on the other hand, opted for simplicity and cleanliness, and ended up with a charming result. None of the thirty levels feels cluttered or complicated, and yet there is enough challenge and variety to hold your attention. A moving platform here and a subtle portal element there can go a long way if used properly. It's also worth noting the great production, from the awesome classical level architecture, to the impressive voice acting and fittingly epic music. Spanthera is a little game with big ambitions and it certainly manages to raise the bar a bit higher for games of its genre.

Just looking at this art, it's like I've been waiting all my life for the Peloponnesian War to be fought by animal warriors.

Let's see if it completes me...

As a lover of reptiles, the headshots are rather disturbing. Also the part where he professes for his lioness, there are two of them there! I guess the other one is a maidservant? Levels are a little mixed up in terms of difficulty.

The spears actually skip off the civilians! Hard heads, nice. Well, until the pointy bit hits them.

Even though part of the infantry guy's head is poking over the shield, it's not too sensitive. You can kind of poke at his feet with no real damage.

As they say, Ooh what a twist! But that final level is a doozy. It goes a little too fast, it's a huge test. Great narrative, though.

Nice game. I liked the last ~10 most difficult levels the best. Could've made the game even harder with more levels similar to these, particularly the last. I think the ease with which you can reset the levels means that you can make it more difficult and do more time-sensitive things, like where you have a moving boulder requiring a few accurate shots. It's a little annoying when you have levels where it's all accuracy - for instance to get three stars you have to shoot 6 guys exactly right - my OCD streak forces me to keep going for three stars after I keep missing the fifth or six guy and having to re-start 10 times. :) I also like that you can play through the whole game in about 15 mins. Even with more difficulty, I would try and keep a play through under 30 mins. Looking forward to Spanthera 2! -M

The voice acting in this is superb. Apart from having to replay some levels over just to get 3 stars, I really can't fault this game.

Shudog - he does say lionesses. If you think about the social structure of lion prides, there's no doubt he's talking to both of 'em.

Does he! Dang, that font really defeats me some times. I missed some animation because I was trying to read the bubbles. Well, that makes more sense.

Does anyone know how you defeat Slithrix? I can get past his force field, but I can't seem to hurt him with my spear.

@ Rygar
If I'm not mistaken, you're supposed to

hit him three times before the force field comes back on, then repeat the whole thing three times. He doesn't really look like you're hurting him, but he's just putting on a brave face.