Here at Jay Is Games we like our games a little strange and wacky, and Jake Hollands delivers that in spades with his offbeat sci-fi incremental game Spaceplan. You find yourself adrift in space with most of your systems out of commission, not sure what's going on or even where you are. It's up to you to get those systems repaired, find out what the heck is going on and try to sort it out. By clicking, of course! Spaceplan is a title that's tough to feature in a review without giving too much away, because so much of it's about learning about your situation and developing innovative — alright, utterly outlandish — ways to resolve it all. Spaceplan is fairly brief, something you can finish in a day or so — rather than something that stays around in a browser tab somewhere until you're ready to start charging rent — and it has plenty of ingenuity and creativity (along with a couple of naughty words, which we should probably alert you to). Unlike the vast majority of incrementals in which you click to buy things which give you bonuses and which only exist conceptually, here Jake has actually implemented them in the game as the other genres do and the results are palpable and a major improvement to the gaming experience. Even your craft's console is whimsically implemented, with vital functions designated things like, 'Word Outputter', 'Planet Looker', and 'Fact Holder'. 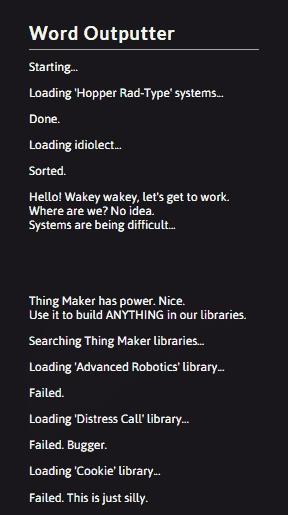 Fortunately your autosystems are intact enough to show you how to get the computer started, with a nifty little primer to guide you in getting sufficient power for everything else. Your systems in Spaceplan rely on having enough power, which can be generated in small amounts manually at the push of a button and later, gradually via solar panels which can be upgraded and... a few other options. Getting the schematics back and operational again will require even more power, and the more info you can access both inside and outside the ship neatly causes the game's plot to reveal itself gradually. Players of incremental games who never appreciated how much an actual plot can do for the genre will discover that with Spaceplan. As I mentioned earlier, Spaceplan is all-too-brief, finishing in just a few hours or the better part of a day. It also avoids the usual clicky-clicky-grind we often encounter in the genre; while clicking manually can help, the vast majority of your energy will be generated by the upgrades themselves rather than you. Fans of absurdism, sci-fi and quirky comedy will find themselves right at home here and find Spaceplan a must-play.

Initially I was not inclined to start up another clicker/cookie game. But this one includes features that the genre usually ignores; actual moving graphics, options, and a mystery. I'm glad I gave it a chance.

Actually now I'm wondering if I messed up at the end. I did the thing and then the stuff happened but now I've got a blue screen and nothing else. Wha hoppen?

amusing game, took me time to get to the end. Sounds like your game may of glitched...
Were you able to

go back in time?

Clicking on "System Peeker" below the words "Planet Looker" gives a different view, which caused a new Idea to appear for me:

Tyrone you make me wonder what browser are you using. You know javascript stuff often depend on an up-to-date browser...

I finished the game and

watched the end-game video. Bitter-taste. I tried to spark some philosophical discussion but found myself out of speech.

When you said "features that the genre usually ignores" I was expecting a different set of features: good sound effects, performance lightness (the things you can do lag-free in HTML5!), a balance between clicker and upgrader playstyles, and an ending

of the traditional type rather than the now-do-it-again-but-faster prestige type.

Also, most incremental games don't make me wonder about the accuracy of orbital mechanics used but hey, sci-fi. And humor.

Options: The available options (volume, autosave interval, manual save, delete save, lag reduction) are already beyond what most idle games offer, but a pause option is noticeably missing. I missed an animation late into the game by assuming that I wouldn't idle into it, and had to replay the whole game with autosave off to see it (it wasn't worth the replay).

For the ending sequence: you know you're done when you

buy an upgrade for 10 power with ∞ in its description

at which point all that remains is

an ending cutscene and then a credits screen.

The ending requires MP4 (H.264) video support, which most browsers have except perhaps some Firefox setups on Linux. If you can't view the ending normally, you can still access the video by finding its link in the game's source code.

I had fun with this one.

@kktkkr, the game pauses if the current browser window loses focus. Well, it pauses the visuals and such to reduce CPU load, but when you return, you've still accumulated the energy you would have gathered in that time.

you know.. i have one question

how does the solar panels keep working when the sun goes black hole?

We'd been wondering the same things ourselves.

only thing I can think of 'absorbing the light of the stuff that gets sucked in' :D

Nice! It took me about four hours to finish, at which point I did have trouble with the final video sequence. The error guide that came up advised me to use Chrome (instead of Firefox) and provided instructions for how to "cheat" back to where I was. That wasn't too hard, but if you don't want to mess with it, it might be safest to play in Chrome in the first place.

My linux firefox contains a "OpenH264 Video Codec provided by Cisco Systems, Inc." in about:plugins. I thought everyone have it? Those failed to play the end-game cutscene must have something misconfigured.

About Ashiel's question, I heard that

Quasars are actually powered by black holes and the brightest objects in our universe.

Usually I get a third of the way into one of these games and I think "Why the hell am I clicking this button?" and give up. But I stuck with it and I'm glad I did. I hope there's a sequel.

This was a fun clicker!

So far I'm enjoying its silliness - but I do have to quibble; "watts per second" is not a meaningful unit. A watt is a joule per second.