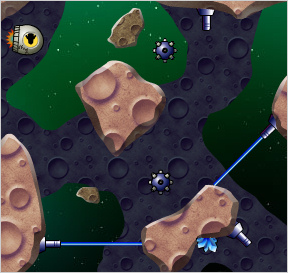 New from Japanese developer Nigoro, creator of Rose & Camellia and Lonely House-Moving, comes physics-based action game Space Capstar II. You play Randolph Clark Rodriguez ("The Invincible Randy" on the space convoy circuit, but you can just call him Randy), a jack of all trades space captain who pilots his trusty Capstar II around the galaxy looking for work. His latest task is to collect a rare mineral from the four planets that make up Point K9. Carefully pilot the ship through twisty passages that lead deep into the planets' cores, avoiding obstacles and taking out lasers by bashing into them (carefully). It's a challenging action game with just enough space wackiness thrown in to make it worth trying.

Control Randy's ship with the mouse, moving it in any direction and pressing the left mouse button to fire the boosters. The spongy space physics make it difficult to move with great precision, so most of the time you'll just have to dash off into the tunnels and hope for the best. Using your rockets and damaging the ship consumes fuel shown on the meter at the top of the screen. You can bump into the walls or crash into small asteroids a few times before you're in too much danger, but avoid the lasers at all costs. They hurt. Landing by blue crystals will refill your fuel meter.

Each stage is comprised of four levels that present you with slightly different tasks. The first two levels let you work deeper into the planet, while the third level holds the item you're looking four. In the fourth level you must dock with the mother ship before moving on to the next stage. Levels often have their own unique gravity pull as indicated by the arrow at the top of the screen. Don't get too used to down being "down"!

Normally it's a bad thing to crash into objects when the only thing that separates you from a vacuum-induced end is a piece of glass. However, in Space Capstar II you can use controlled crashes to your advantage. Certain small asteroids will often stand in your way begging to be destroyed. If you oblige them, you may notice debris scatters when they explode. This debris can be used to your advantage to take out pesky obstacles such as laser cannons and mines. You shouldn't go careening around stages bashing every wall you see, of course, but controlled crashing can be a good thing.

Analysis: Space Capstar II doesn't add a lot of newness to an old genre, but its overall package is something worth experiencing. What makes it feel fresh is the slick presentation, the adventure-esque stage layout, forgiving game mechanics and, to be honest, the campy 70's-style soundtrack. You'll feel like an old TV space hero.

The most disappointing part of Space Capstar II is that it's so short on lower difficulty levels. It will take you literally just a few minutes to work your way through the game on the easiest setting, forcing you to up the challenge in order to experience more of the game.

Space Capstar II isn't a game that will blow you away on any particular front, but you will be left with a satisfied smile at the end.

Well, I'm always on the lookout for Space Taxi type games, so this hits the spot something fierce. :D

how do we fire missiles then? I must be missing something, because I can't see it on the instructions...

argh. last comment was by me, typekey signed me out for no reason at all while I was typing that...

You can't fire missiles. Your only weapon is your fiery exhaust. I think that should probably be mentioned in the description. You can destroy lasers and enemy ships without taking damage by cooking them with your backside.

Anyway, AWESOME game. These Nigoro guys make me happy over and over again. The soundtrack is unreal.

"Using your rockets and damaging the ship consumes fuel shown on the meter at the top of the screen."
- JohnB's description, 2nd Paragraph

you aught to change this to thrusters then, 'cause it was rather confusing.

I'm stuck at "NIGORO's web site uses http cookie. Please confirm whether the use of Cookie is turning on, and push the button below. [Set Cookie]". What am I doing wrong?