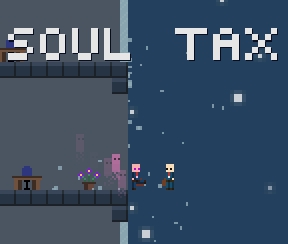 It is said that only two things are certain: Death and Taxes. In Soul Tax, a new possession puzzle platformer from Jarod Long, the story centers on these two facts of... death. See, you're a ghost who's been haunting this extremely complex office complex, and one day the grim reaper shows up and lets you know that you owe tax on all the time you spent being an ethereal spirit. And how are you going to pay these taxes? Easy. Defenestration and pixellated murder.

You control your ghost with [ESDF] or [WASD] (you can change this on the title screen with [C]), possess or leave victims with the [spacebar], and make your victims punch, kick, and use their special abilities with [J], [K], and [L], respectively. Using these bystanders, you have to help Death reach his required soul count by, well, killing people. It's all in the name of cosmic balance. And it's just a little fun. Each victim/target has a special ability that you can exploit to make sure you hit your death quota by the end of the time limit, and this lends strategy to the arcadey play, forcing you to make hard decisions about who dies and when. Some levels can be conquered through simply raging out and punching your way through, but, by and large, you're going to need to exercise your brain muscle to really do this thing right.

That, and Soul Tax is hilarious. Do not skip the dialogue! Just don't. It's well-written and funny, and there's even a darkly comic character arc that's almost harrowing. It seems very much like something that would be at home with Adult Swim. The graphics are pixelly and tight, and the controls are intuitive, though a little loose. It might also frustrate some that [ESDF] is the default, since [WASD] is the standard. It's never too difficult, and you might wonder why the bystanders aren't fighting back or running from murderous possessed madmen, but it stays interesting the whole way through. The puzzle elements are a huge draw, and the game makes good use of the various special abilities for interesting levels. There's definitely room for even more, and I'd love to see a sequel with more abilities and hazards. This is a fun, funny, and original game that works a good balance between puzzle, platformer, and arcade action. Grim and bloody but so much fun, Soul Tax is the most entertaining death and taxes will ever be.

Thanks for mentioning changing the controls.

jeblis, that's very easily fixable. The reviewer accidentally added a little something extra character to the end of the link, making it this:

Just delete that extra bit and you're good to go:

I didn't like the controls at all. It would have been much better using the arrow keys to move, and [Z], [X], and [C] to attack; leaving [Enter] and [Space] as they are.

Anyone have any tips for how to beat level 10?

@ProfPuppet: Try using the gaurd to trigger the robots to go down before you follow them, then jump over them on the last level. They won't follow you into the hole.

It literally seems impossible. It's too touch and go with hitting the second window down, and 90% of the time that I hit it and make it through, I'm still holding down right so I just fly off of that tiny platform they give you.

Great idea, but the controls suck and the time limit is too hard. Frustration ensues. Me not like.

Also, WTF does every other game have to be all "retro" these days? This would be more enjoyable with proper graphics and SFX.

@Waggles: You're just suposed to use the guy on trop to drill through the roof and land on the guy in the building. It will kill them both.

It's a fun idea but the time limit became too much of a frustration factor coupled with the finicky controls. And it needs a much faster way to restart levels.

I too think the pixely retro look has been overdone these days.

You don't have to go down the sides. Just drill straight down while holding the l key, and once you hit the bottom you'll probably either kill the guy or put a hole in the floor before the drill guy dies. If it's the latter, just possess the other guy and jump into the floor.

Good game :) But I couldn't get past the

I might try again later. I'm curious to know how this story ends :P

I wanted to like it, but the controls were too finicky. Especially when the game called for precise jumps, it quickly became more frustrating than fun.

How do you complete the first bullseye level? I have no idea...

In my opinion, that's the hardest level in the game. It all depends on your reflexes and luck... basically, you possess the policeman and fall down, shooting the regular businessman right before you splat.

go as fast as you can with the burglar all the way to the top. Kick the first guard to the ground floor, and kick all others out the window. Kill the manager with normal kicking and punching, and then unpossess the barglar and go to the bottom to possess the two gaurds at the bottom floor and suicide by robot.

how do you beat dr. derp's revenge?

Small hint: Notice the tiny doors and hallways, and figure out how you can move through them.

Shrink the burglar with Dr. Derp and use the shrunken burglar to move through the level and kill the businessmen.

Im stuck on level 9, stranger in the night. Any advice?

There are a few ways to beat that level. What I do is, I try to time my jumps over the robots so that I don't alert the one on the floor above me. Then I punch each security guard to death (or kick them out the window once I get high enough) and move on to the next floor.

Once you get to the top just open the door and kill the manager.

If anyone else is stuck on any level, someone made a video walkthrough: http://www.youtube.com/watch?v=xxu3MurIR0I

WASD is cool for english qwerty keyboards and bad for other people.
ESDF is good for most of people, english or other languages keyboard possesors.
So I can understand developers. But allowing use of the arrow keys should be standard, of course.

There's a new configuration available that uses the arrow keys and zxc. Surprisingly, I don't like it - I find it easier to use my stronger hand on the action keys.

They did a patch that allows you to change the difficulty. Just after I beat it on normal. I was hoping for a longer ending, and more people, but it's still a great game

@Jarod Long - That isn't helpful on level 9. There are NO robots AT ALL on level 9. Level 9 introduces a burglar.

@lucyolsen - That's how to beat level 9.

Unless this game has been altered, like different versions...

I enjoyed that last level.
>=D

"Made in 1 month for The Something Awful Game Dev Challenge."
0.0
One month? Is a GREAT game!
5/5 and added to favorite!

I just beat It! That was great.

The only levels I had trouble with was number 29(Creepy Boss) and Number 21 (Bullseye 2) but they both only took a few tries anyway! :)

Wow, is it just me or is it possible to get stuck on the second level?