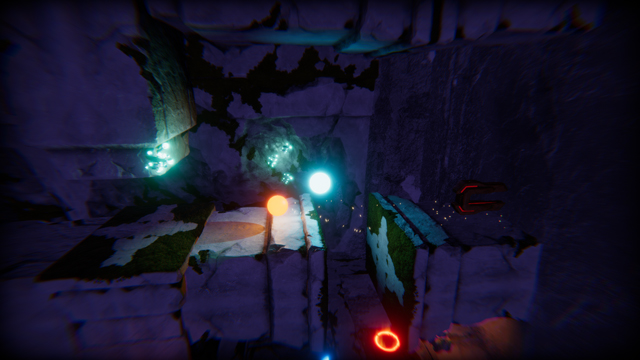 In the beginning, there was an epic battle between two ancient souls, one embodied as Chaos, and the other as Peace. After a prolonged struggle, Chaos won, and its executioner Darkness shattered Peace into many pieces. And yet, the war was not yet over, for a single shard of Peace managed to escape. In a stunningly beautiful two-and-a-half dimensional one-man indie platformer/puzzle game created by Yasser Reda.

Your character, as it were, is a this one soul piece represented by a small, spherical blob of light. You start out small and powerless, barely being able to jump, confronted with a huge wall and moving platforms. Your task, should you choose to accept it, is to navigate through this dark and dangerous, miniature world and face the danger once and for all. Your journey will be mostly silent and solitary, but you will acquire some new abilities along the way. Delve deeply enough into this world and the secrets of how to double-jump, glide, pull objects along, and more will soon be yours.

With your newfound abilities and confidence as you successfully solve puzzle after puzzle, it might be tempting to think yourself ready for your final encounter. But trust me, even after you manage to pull back that final gate, there might be more waiting than you might have expected. While Soul Piece doesn't do anything particularly off the charts in the individual mechanics, the intriguing story, beautiful graphics, and the way the light shows off the world makes the overall experience spectacular. One thing to note is - although the game author insists that the game should be run on "fantastic" for the graphics - that this may slow down the game substantially and make the platforming aspect difficult and nearly impossible on non-high end machines. You may wish to lower the graphics settings in any case if you encounter any lag/slowness in the game.

Soul Piece is a combination of a platformer and puzzle type game, which I think is well-described as a 2.5-D game. Your movement is limited to two dimensions - just back and forth as well as vertical locomotion via jumps, double-jumps, and gliding. It is a bit off-putting at first if you're more used to 3-D games as I admit I was, but you'll soon get accustomed to it and see that it is a fun and unique challenge in its own right. A soft, slightly haunting music with a touch of an upbeat melody plays in the background, alongside the sound of the pouring rain. Controls are explained in-game as new abilities are unlocked, but some of the basics are moving back and forth with [A]/[D] and jumping using [Space]. If you do decide to take on the challenge, good luck taking on Chaos - you'll need it!