Your life was a simple one, eking out a meager existence on your farm while trying to avoid choking on the storms of dust that regularly sweep across the landscape. But this morning, the bright lights of an explosion burst in the sky, and now you've found this sparking mechanical creature in your front yard. Is it friendly? Is it hostile? Or, perhaps scariest of all... are you teaching it what to do? A Ludum Dare 24 game jam entry by Paul Greasley, Soul Jar is an adventure platformer that tasks you with directing the evolution of a robot companion, for good or for bad. 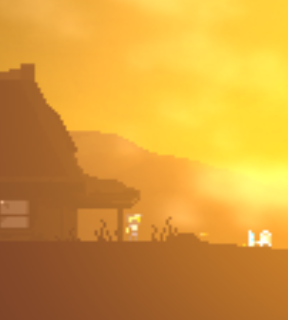 Move with [left] and [right] arrow keys and jump with [Z]. Pick up objects with [up] and either use them with [X], or drop them with [down]. Early on, you will encounter the robot who fell to Earth, and he will be a valuable ally as you trudge across the landscape, trying to figure out what exactly just happened. First of all, he can dig items out of the ground, when you stand by him and press [down]. Second, and more importantly, he'll learn behaviors from you. Constantly blast your way through enemies, and he'll do that as well (though too much, and he'll just start randomly firing at everything, even you.) Protect him from the health-depleting dust storms, and he'll figure out ways to protect you. Be stingy with the power-ups you find, and so will he. There's a lot of possibilities, and they'll lead to several different endings.

Certainly one of the most ambitious of LD24 entries, Soul Jar is visually stunning, with a killer premise. It demonstrates both the creativity the Ludum Dare format can inspire, but also its limitations: in implementation the controls are clunky, and the initial vagueness of premise makes one think that, as a game, Soul Jar could afford a little more "tell" along with its excellent "show". Such is the life of a game with limited play-testing. However, Soul Jar's atmosphere is so evocative, and the evolution theme represented so well, that it is certain to score well in the competition, and should be enjoyed by all fans of Limbo-style platformers.

I really hope Greasey (great name btw) expands and improves this game because it is filled with potential... but as it stands it's completely uneventful. I just kept going and going and going. I don't know what the different endings are but the only ending I got was dying and restarting. An inventory would be good. I don't understand why I can't carry a gun and wear a hat at the same time. Good graphics and a fairly unique idea, but minimal gameplay. But that's what I like about 48hr game competitions, you never know what might end up becoming a great game.

Plus the little voice in my head kept saying Johnny Five is ALIVE! so that must be a good thing.

You spelled his name wrong. It should be Paul Greasley.

Aww... I liked it better when his name was Greasey.

Well, regardless of how you spell his name, Mr. Greasley has the beginnings of an excellent game here. :) Wonderful atmosphere and a unique concept. It will be interesting to see if he expands on it.