Ah, July 11, 2010 shall go down in history. Both teams had never won the cup before. But in the end, it was Canada who held it aloft, tears of maple syrup running down their cheeks. Yes, truly a day that will... what? What are you talking about, Spain and the Netherlands? Oh, you thought I was talking about the FIFA World Cup? No, dude, I was talking about something much more important: Soccer Cup Solitaire, the new card game with mahjong solitaire elements from Anawiki. What do you mean, that's not impressive? Did Spain or the Netherlands complete a 22 pairing streak that completely cleared the board? No, I am pretty sure they did not. Advantage: Canada. Des plus brilliants exploits indeed. 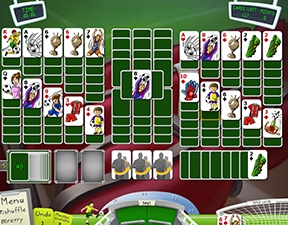 The combination of sports theme and solitaire may have you thinking of Fairway Solitaire, the smash hit golf-themed game from a few years ago. Soccer Cup Solitaire isn't simply a reskin of this earlier game. The gameplay is completely different, akin to Heartwild Solitaire. The game deals out a field of cards and also provides you with a deck. Your immediate goal is to clear cards by matching them by rank. An ace, for example, will match with any other ace regardless of suit.

The purpose of all this card clearing is to earn points, because every 4500 points your team scores a goal. There are several ways to increase the points earned per matched pair, notably by creating chains of matches called sequences. To keep a sequence going, the next cards you match should be the same, one higher, or one lower in rank. So, if you matched two aces, you could match another two aces, two twos, or two kings to continue the sequence. Sequences increase the multiplier, up to a max of 3. You also can get bonus points by having the matched pairs be of the same color (heart ace with diamond ace, and spade ace with club ace) or even more points if they are exactly the same (ace of hearts with ace of hearts). Finally, you can gain and lose points and even goals through event cards, which are turned over in the deck. Event cards are the only way that the opposing team can score against you.

There are also bonus cards on the field which you can uncover to help you on your board clearing quest. These cards can give you restores (an extra flip of the deck), shuffles (all the cards remaining are gathered up and dealt back down), retries (if you have bad luck with the other team scoring a lot, you can start the whole level over), undos (exactly what you'd think) and wild cards, which sit in the lower right hand corner and can be used at any time to match cards on the board. Certain levels also have other helpful or hindering cards, such as locks (where you must find the key to open them) and the soccer-themed substitution cards (which you can swap with a card on the field). One complete clearing of the board is called a "level". In the group stage at the beginning of the game, there are six levels per "match" between your team (Canada, in my case) and the lesser teams trying to take the cup from you. In the later, elimination rounds, there are nine levels per match. This ends up being (if my math is correct) 42 levels per cup victory. 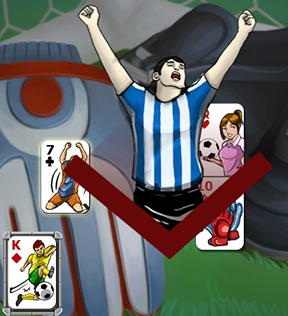 Analysis: Played at the natural rate of a level or three per day or so, one full play through of Soccer Cup Solitaire can give you weeks of enjoyment, and the game is the definition of replay value. Although I personally liked Fairway Solitaire's system of being able to choose "holes" to replay, the Soccer Cup Solitaire approach does make things much more of a no-brainer — just load, click resume and play.

The game has separate controls for music, sound effects, and the commentator. While I quickly turned off the commentator (there's nothing more irritating than hearing "They're taking their time on this one" when you're trying to decide what to do next), the rock soundtrack was unexpectedly good. The main theme in particular was so good that I actually sought it out (so you don't have to retrace my steps, it's "Satisfied" by Saints of Silence).

The game definitely improves on the similar Heartwild Solitaire Book One by not making speed a bonus-getter. The levels aren't even timed. It's actually kind of funny, because that means that the punchy, cartoony and rock music filled Soccer Cup Solitaire actually ends up being the more relaxing game, especially if you switch out the game's soundtrack for some soothing music of your own.

If this sounds like something you might enjoy, but you'd like to try it out first, you're in luck. A free Flash demo is available, which gives you a perfect view of the basic gameplay, although the level does not contain any special cards and lacks music.

Great review, though your math is wrong. There 54 levels in the game - 3 matches in group stage x 6 levels + 4 matches in elimination stage x 9 levels.

Definitely a fun zen kinda game. And yeah, turn off sound & music & just provide your own. I notice that the victory fanfare sounds like they incorporated vevezulas into it.