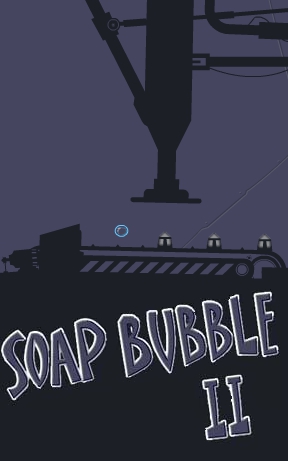 While we at JayIsGames pride ourselves on featuring the best and latest in casual gaming, we always have time to feature quality works that fell through the cracks. Case in point: Soap Bubble, a, if not the, prototypical avoidance game, was originally released in 2002 and became one of the earliest games featured on the site. The charming and devilishly difficult tale of an ultra-delicate bubble making his way through a cave back to his friends was the start of great things for Anders Gustafsson: his releases include the Audience Award winning Gateway series and the coolly claymated The Dream Machine. So it seems that the 2006 sequel which continued the story of the iridescent-sphere-that-could passed us by... until today! Soap Bubble 2 is a great simple idea game that keeps what was best about the original while making the concept its own.

Gameplay is the mostly the same as the original: using the [arrow] keys, float the soap bubble through the factory and explore what you can find. It is, of course, incredibly fragile, and any contact will the scenery will cause you to burst with a disparaging "pop". It has the physics of a floating bubble, meaning it will sink slowly given no input, tend to float in water, and even the slightly touch of momentum (from you or a fan) can send it hurtling. Timing is of the essence, so be careful. Your bubble's lifespan is determined by a "bubble fluid" bar that slowly empties over the course of each level. Popping yourself gives it quite a hit. Run the meter out and it's game over.

Soap Bubble 2 is a worthy follow-up to a classic. The sequel's aesthetic is more gray and technological as compared to the original's shadowy organic feel. It's a little less appealing to my eye, but it does make for some cool level designs. The difficulty is intense, even frustrating at times, which is just the way I want it to be. There's a sense of humor to the proceeding: levels that seem impossible until you realize the gimmick at play, playful shifts of scenery that force a quick rethinking of strategy, moments that trick you into thinking things will happen when they won't... I must have failed a thousand times, but wouldn't stop till the finish. Thankfully, the new lives system is much more generous that the original, even if the slowly emptying bar makes you feel you should move faster than you should. One drawback: the password system does feel a little unnecessarily archaic. Overall though, Soap Bubble 2 uses simple mechanics to create devious challenge. Be sure not to blow it off!

Okay, soooo this game is impossible...

gods and little fishes, this game is an exercise in pointless frustration, and on top of that it has a lives system?
My biggest complaint is unavoidable 'surprises' near the end of already tricky levels swinging out of the blue.

This is a really attractive, difficult, yet playable game. Controls are sharp, play is clear. But one very strong point needs to be made to the dev.

If you are going to have a game where you die, and die a lot, in the process of finishing, while you're figuring it out you don't CARE what the high scores are. Maybe later, but right now you just want to finish. Having codes is fine, but having to go back to the menu to enter a code is just silly, when you could add a continue button. And having to click through to turn off the pointless high score scren just to get to the menu each time? That's downright stupid from a usability perspective, especially when it requires you to pick up a mouse for a keyboard-only game.

In the face of such obvious ability elsewhere, the presence of that kind of persistent annoyance is baffling. Did you let someone else make your menus?

I'm not sure how you all missed this in 2006, but I'm glad to see it up here! It's definitely a great play, and I'm going to have to replay it now.

It IS difficult, which is sort of the point of games, since if it weren't difficult you wouldn't have a sense of accomplishment when you complete it.

But it's not TOO difficult. I don't think I raged-quit the first time I played it; the difficulty curve is pretty smooth, and the "cheap shots" are minimal if you're observant.

And of course, I have to note that all the stuff happening around you in the levels is a lot of fun to watch and understand.

extremly difficult and long, but it does have that "I WILL BEAT YOU, EVEN IF IT TAKES ME MY ENTIRE LIFE" feel to it.

and is it just me, or does this secret factory mass produce nukes?

Watch who you talking to, this is one of the early games of one of the creators of "The Dream Machine".

I don't feel any frustration, but my keyboard is irritating; what with all the clack clack clacking sounds and unresponsive keys, I really get in trouble when I play games like this.

Think it could use a continue button though; I'm not concerned at all about my score. I just want to play.

Didnt' realize that the level codes were up in the top right corner until my third play through! I'm still having a hard time with the rotating missle. I think you need to ride the broken missle down the bottom but haven't trouble with the execution.

MisterThou :
Yup, you need to go with the defective rocket that appears every 4 or so.

Here's the "last" scene if you want to skip ahead:

Note that there's no real reason to watch the ending. It's just for you to know that you "beaten" it.

Besides a few incredibly annoying parts such as the defective rocket level thou mentioned, and the underwater fan level, the avoid parts weren't TOO bad. However, a lot of times it required quite a bit of memorization. Ex:

during one level you appear to need to go through a minuscule gap. However, when you enter the entrance, surprise! the warhead gets tilted horizontally and you'd be crushed if you stayed there. The last level itself featured not only a lot of memorization but also hard to judge "gravity" where you basically had to keep to the top 10% of the level or die, though not immediately, but rather like 3/4 of the way to the end.

Stylish, well made, and way way too hard. And the reason it's too hard isn't because of the actual challenge, but because of the fact that every time you die, you have to start from the beginning again. To me that makes the game nearly unplayable, because by the time I get back to the section I couldn't beat, I've probably lost a dozen lives or so in previous sections. It knocks it down from a four to a two for me, sad to say, because it feels like a great game that just imposes arbitrary limits on the player.

Heh... clearly I'm not good enough to get far enough to enter codes after reading some other comments - but I also want to add that it's not every time you die you go back to the beginning, but every time you lose all lives... I was a little hasty there because I was frustrated, but I don't want to turn anyone off who would find this game to be their thing.

I think the level codes system is a bit antiquated. There's a reason it fell out of favour in modern games. While playing, am I supposed to watch what I'm doing while simultaneously writing down a code? Or do I have to pause the game at the start of each level? Either design decision seems like a poor one.

Overall, the game is fun but it does show its age a bit. In internet years, 2006 was ages ago. I enjoy seeing Anders' progress as a developer though.

Remember, it's much more satisfying if you don't skip ahead.

One last piece of advice:

The hit detection is only for the center of the bubble, so the game is not as impossible as it may seem.

Nono, when you die the code doesn't disappear. You read it and click into the menu to immediately type it in. Which, eh, really seems beneath the point. Nonetheless, I agree: Either way, the design decision seems like a poor one.