Life as a little green blob should be simple, shouldn't it? You're as cute as all get up, reside in the most charming cartoon world of colors and spunkiness, and have not a care in the world. Such laid back peace and quiet is nice and all, but rather boring, don't ya think? You just couldn't blame a little green blob like Filo if he started thinking existential thoughts and perhaps, along the way, tempting into being a malevolent force out the destroy the world. Filo's call to adventure wouldn't be the first to begin in this way. Yet little Filo isn't alone in his hero's quest; he has his ME and there's a lot of them. So Many Me, in fact, that Filo is well-equipped for any problem life throws in his path. And in this action-filled puzzle-solving platform adventure by Extend Studio, there are as many obstacles thrown in Filo's path as there are ways to circumvent them. Enemy fire, foes, spikes, unreachable heights and locked doors, to name a few, might at first appear insurmountable. But as Filo travels onward through his whimsical universe, you help him acquire new abilities to reach his goal in a creative twist on lemmings-style resource management. Available for both Windows and Mac on Steam, So Many Me is instantly engaging and filled to the core with enough content to absorb you for hours on end. 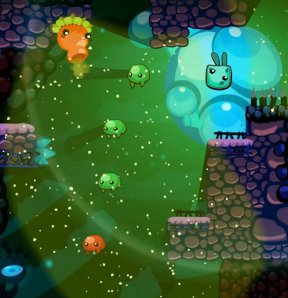 By all appearances, when you begin playing So Many Me, you'd think this is just a simple side-scrolling puzzle platform game with bouncy 2D graphics and the slightest of nods toward Super Mario Bros. Using the left and right arrows to move, [space] to jump and [D] to transform, your progress is relatively unencumbered as you utilize your extra ME into a step past spikes or jump onto a foe to knock him out of the way. This first impression changes fairly early on as each stage becomes more involved. There's more than reaching the level's exit, which is tricky enough; you'll also want to collect the secret items, some easily found, others more deeply hidden. One of three secret items hidden on each level, collecting an ark seed allows you to increase the number of ME you can have. You'll need as many doppelgangers as you can gather in order to press buttons, stop enemies and create platforms to unreachable zones. The second secret item, costumes can be collected to customize your MEs appearance. Lastly, you'll want collect artifacts to trade for new skills. Since some of those skills gained later in your adventure will be needed to work through puzzles in earlier stages, you'll have plenty of motivation to traverse back and get them. 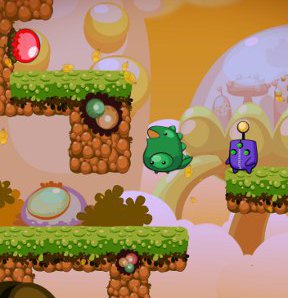 Experimentation, trial-and-error style, is a requisite part of working your way through the obstacle courses. In this sugar-coated world, death threats don't have much bite; failure lands you relatively close to where you left off so there is nothing overly punitive about it. The game with its logic-based puzzles is challenging enough without having slight errors turn into crushing demise. The chance of death is just enough to keep things interesting as you work out the solution to your goal. Even the boss battles are more strategy- and logic-oriented than leet skill. Nonetheless, the awkwardness of the keyboard controls hold the potential for many a frustrating moment. If you have a gamepad controller, you'd be better off using it as the keyboard commands require an unusual amount of agility to master. Fortunately, though, the character movements are responsive, lending precision control—extremely useful considering timing is important in more than one way: needing to time moves precisely to make a jump or outsmart an enemy, or using your specialty doppelgangers in the right place at just the right moment.

As there is such a large amount of content and a great deal going on in Filo's adventure, there is a lot of explication during cut-scenes and other character interactions. These veer toward tedious at times since the story and premise, while entertaining enough, don't match the excitement of the gameplay itself. Yet these narratives are often used to explain a new function or mechanic, so they're not easily skipped without feeling some needed information has been missed. That said, So Many Me's gameplay is intuitive: it manages to feel familiar and fresh at the same time. It's easy to pick up, has enough tinge of convolution to engage your mind without being gratuitously complicated—all this topped off with good humor, cuteness, and unstoppable fun.