Got a significant other who snores? How about a parent, or a little brother? Now imagine if that person was an elephant. Yikes. I think the neighbors might start calling in about disturbances of the peace at that point. It's no wonder, then, that the jungle denizens of Alma Games' Snoring Before Time are eager to do something, anything, to wake the local elephant from his nap and make the jungle quiet again. This adorable, animal-themed puzzle game has a similar premise to the Wake up the Box series of games, but instead of drawing shapes, you'll be interacting with the local fauna and making use of all their animal superpowers; just click on them to make them do their thing! With the help of yaks that roll, zebras that jump, bouncy owls, and many more, knock over Mr. Elephant and give a rude awakening! And yes, we did just say "bouncy owls." It's "push or be pushed" in the heart of the cartoon jungle, and what gives Snoring Before Time its appeal is the ways in which every animal reacts differently to being clicked, shoved, or otherwise activated. 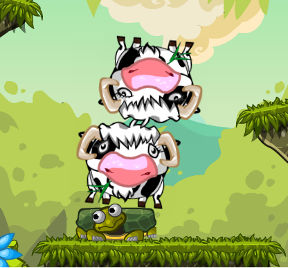 Rather than simply treat its critters as different shapes, whose main differences lie in how physics affect them, just about every creature in Snoring Before Time has its own distinct power, such as dashing at a high speed when hit or being able to change shape. It gives the game a bit more direct player interaction than a standard physics puzzle, and offers it shades of a point-and-click puzzle. The physics themselves are generally good, which is essential for a game of this type. The real downside to Snoring Before Time is that it requires you to collect a majority of the game's floating bonus pickups (in this case, rune stones) to unlock the final world, and doing so means completing most of the levels in extremely precise ways. Many stages contain timed stones that vanish quite quickly, meaning you'll need to activate certain animals at exactly the right time and in exactly the right order to grab them. It's unforgiving in a game that's otherwise very laid-back and chill. But the puzzles themselves are otherwise solid and the game packs on the charm, meaning that physics puzzler fans can still find loads to like. It's a jungle out there, but Snoring Before Time has enough charm and fun gimmicks to rise above the pack.

nothing shows up after it shows the "A10" logo. its just a black screen with music in the background

3,829 Views
2 Comments
chrpa— Jayisgames needs your help to continue providing quality content. Click for details What a beautiful game we've got from Ichima Coffeedo! It is the complete renewal of five years old Room 17 and it's very well done indeed. Two weeks...  ...

3,662 Views
5 Comments
chrpa— Jayisgames needs your help to continue providing quality content. Click for details Rinnogogo left you astray in a small train station. All alone, you wander around not knowing what to do - you can't leave the station because there isn't...  ...