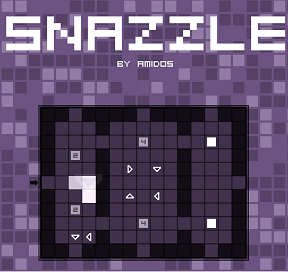 It's Snake! It's Snazzy! It's Snazzle! A simple idea puzzle game by Amidos, Snazzle takes its inspiration from the classic formula of slithering reptiles extending themselves by chomping on fruit, and then trying to avoid crashing into itself. However, by modifying the premise with a shiny coating of tile-based programming strategy, it creates a fresh and cleverly designed experience.

Part of the fun of Snazzle is sussing out the mechanics from the abstract symbols presented, and thus, very few instructions are spelled-out in-game. Generally though, in each level, a snake will enter at the space and direction marked by an arrow. Using the mouse, you must click on the boxes of the grid to place a limited number of arrows, so as to direct the snake into a path where it will consume all of the tasty white food squares therein. The snake must avoid crashing into walls or itself, and each time it consumes a food square, it will grow in length. If there is nothing blocking it, the snake may travel "off the board" to reappear at the opposite side. Later levels feature lettered teleporter squares, X-ed out square where arrows cannot be placed, and numbered food squares that can only be consumed after eating the given amount of other square. Snazzle starts off a little slow, and its minimalism is a little off-putting. But once it properly demonstrates its rules, Snazzle wastes no time into getting into some real meaty brainteasers. By the end of all15 levels, Snazzle becomes quite the spatial and abstract thinking challenge. In short, Snazzle has just the right amount of razzle-dazzle for those looking to be frazzled by a fun left-brainy kind of puzzle.