Elizabeth Hughes is a photographer, and she's good at it, too. There's something else she's good at, as she discovers the day Duchess Daffington accuses her fiancé of stealing. Naturally, Elizabeth sets right out to clear her beloved Nicolas of the crime—by climbing through second story windows, rifling through wardrobes and other, um, means of obtaining evidence of his law-abiding nature. She's very skilled at it such things you see. As it turns out, these are just the skills to earn the savvy female protagonist a very prestigious invitation—the offer to join Snark Busters: High Society. 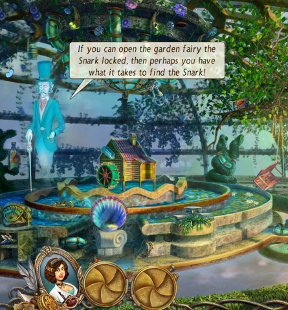 Lucky for you, you get to tag along for the soaring third installment in Alawar's unconventional hidden object puzzle adventure series. Catching the Snark is nice but catching Olivia Daffington in her lie is even nicer. To do so, travel through backwards worlds and interesting locales to get the picture that proves Nicolas did not steal that vile vixen's silly locket.

Navigation is a snap: follow the arrows to exit one scene and enter the next. It's not all about searching, though. There's the fun of adventuring, discovering and a balanced mix of mini-games—sometimes easy, sometimes tricky—to keep gameplay dynamic. Interactive areas will glimmer only after you discover them the first time. Or, select the "expert" level to forgo sparkles and to slow down the hint/skip timer significantly. Outside of the photo focusing puzzle, all mini-games have a skip function. A user friendly hint button will nudge you where you need to go if you get stuck and the true widescreen—both in full screen and windowed modes—lets you better delight in all the sights.

Because the Snark is such a mischievous little bugger, dashing around disassembling all that he touches, there's plenty to search for here just as in the first and second Snark Busters games. Yet this time, except for an occasional broken mirror or frayed rope, the sought after objects are whole and in good condition. When you pick one up—or when you click on an interactive area—a circlet will open up displaying the objects needed before such somethings as a doorway or useful tool is completed. Most of the five chapters involve separate subplots about various spirits of Snark Busters past; do a ghost a favor and he'll help you out, too. These side stories make each chapter more purposeful and lengthy, to result in about 5½ hours of game time. 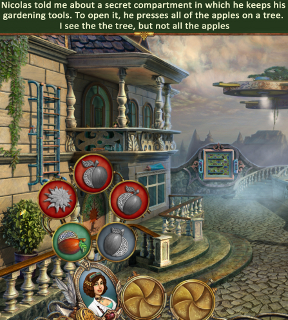 Analysis: If you're looking for a game that's bright, cheerful and a heck of a lot of fun, you're in for a special treat! In an industry that is glutted with the same ol' same ol' time and time again, Snark Busters: High Society happily brings unique to the table. I know, loved ones in trouble is an oft-used plot device, hidden object games are fertile breeding grounds for ghosts, and the "circlet" form of search, while not common, has appeared already in games such as The Mystery of the Crystal Portal series and Depths of Betrayal.

What is unique is the way Snark Busters: High Society keeps the story upbeat, engaging and smart without dropping into inanity or triteness. It doesn't second guess its players' intelligence by pretending we don't already know the secret to this mystery or by offering up artificially contrived plot twists. Instead, characters are well-rounded and likeable (you'll even like disliking the villainess), and the story is kept fresh by a new subplot in each of the five chapters. The task of finding objects never feels arduous or strained because it fits naturally into the adventuring element of the game.

Fresh does mean change, though. While I was glad to forgo the eyestrain of seeking barely recognizable fragments, I'll admit some might be disappointed in the change from little pieces to whole objects. The crisp, clear details of every scene made the switch necessary: odd-shaped fragments would stand out too much against the lovely backgrounds. Then, because no fragments means a bottom-of-the-screen display of pieced objects is impractical, the circlets allow for a wide array of items to seek without fumbling through a cumbersome side-scrolling inventory bar. 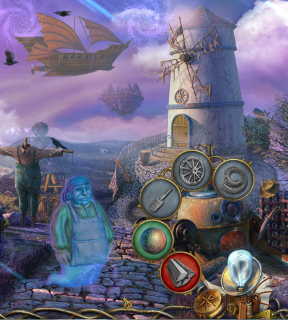 All this fabulousity is tinged by two tiny flaws. One is Elizabeth's disconcerting yet chuckle inducing Milli Vanilli moments. It's a good thing, then, that all of the voice-overs are marvelous listens, paced perfectly and sprinkled with snarky witticisms (Newscaster Jessica Marrey, for example, is spot on hilarious!) A pricklier thorn is a photo development puzzle that begins the first chapter; the red lines are misleading and the controls are not explained well enough. Confusing at first, once you figure out the trick (or take a peek at our walkthrough), this puzzle is enjoyable and much easier the next go around.

Snark Busters: High Society emanates high quality and superb design down to the smallest detail. Love gorgeous aesthetics in your games? You'll love the visual artistry of the steampunk-esque fantasy environments. It starts off with a couple blemishes but soon develops into an entertaining, casually challenging and smirk-filled experience. The colorful worlds and humorous story provide a much needed departure from the standard fare's woeful tales of gruesomeness. So give it the chance to win you over. It's easier to catch a Snark by its tail than to be not beguiled by this fanciful seek-and-find romp.

7 day a week
the number vof the side World ?
number of people in a dule is 2
and Rolte the number six to get to this number? what is it?

It sounds like you're looking for the code for the vault in the pirate ship; the solution for the vault can vary. Please refer to our walkthrough�highlighted in a blue box above the comments�for specific help on how to find your solution.

I seem to be stuck in a weird way... got the garden fairy from the backwards world, but then it disappeared out of my inventory before I could add it to the fountain. I also noticed something popping up randomly in the portrait of Elizabeth in the lower left corner. Is that my fairy? How do I get it out? Just clicking it doesn't seem to do anything.

You might want to have a look at the walkthrough above the comments for some help.

I didn't see anything in the walkthrough that addressed losing something out of the inventory. Since it's still early in the game, I might just start over. Thanks, though.

If you are going to start over, you might want to think about uninstalling and reinstalling the game first. I've had that same thing happen with another game and it worked the next go 'round. If it does happen again, you might want to contact customer support wherever you bought the game.

BTW, the walkthrough does say that you don't collect the Fairy at first but need to wait till later.