Snark Busters 2: All Revved Up

Welcome to Snark Busters 2: All Revved Up, a bizarre, colorful, steampunk-ish world of broken hidden objects, magical mirrors, and mischievous chandelier-breaking cats! As Jack Blair, famous Formula 0 racer, you follow in the footsteps of your grandfather who was not only a better driver, but a better Snark Buster as well! He disappeared after driving through a tunnel in his last race, however, but somehow you find a letter of his that entices you into finding him by searching for the elusive snark. The sequel is every bit as whimsical and engaging as the original game, Snark Busters: Welcome to the Club, and it's a treasure of an experience from beginning to end! 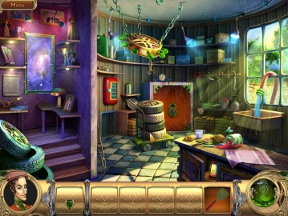 Snark Busters 2: All Revved Up ditches boring text-based lists of items in favor of the "find pieces of a few items based on their color/shape" mechanic. So, for example, instead of hunting down a pump, you instead refer to the inventory slots at the bottom and search for items matching the general shape and design of pieces chopped through the item's icon. Find them all and the object can be used to solve a pressing puzzle nearby!

Most of the time some pieces of an object will be red, indicating its present unavailability. By completing parts of other items, opening doors or otherwise exploring about, you might just uncover one of these shards, making it a good strategy to keep an eye on the inventory bar at all times. The ultimate goal of each area is to obtain a medallion that will open the portal to the next set of levels.

A forgiving hint system makes Snark Busters 2 easy to play and eliminates any sort of frustration you might encounter. The occasional mini-game/mini-puzzle also crops up, but they're short, not too challenging, and can be skipped after a few moments. They always fit the theme of the game, too, so no crazy gimmicks to worry about here. 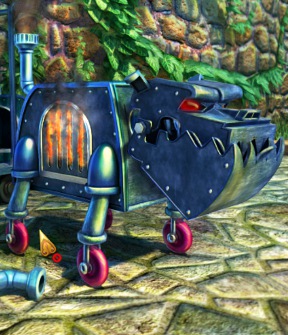 Analysis: Snark Busters 2: All Revved Up has one big strong point: its environment. The world of Nodnol is quite unusual, never falling too close to traditional steampunk fare or diverging into the realm of pure fantasy. Everything is slightly whimsical in nature, encouraging you not to take any part of the game seriously, leaving you feeling light, interested, and fully engaged in the bright and wacky world you have the pleasure of interacting with.

Compared to its predecessor, Snark Busters 2 lives up to almost every standard set by the 2010 release. Gameplay is quick and enticing, the setting and story are lighthearted and fun to follow, and the puzzles are smart without being too difficult. The plot feels a bit on the thin side, on the other hand, and doesn't feature nearly as much activity or character growth as the first Snark Busters. Story isn't the central focus of the game, but it's always nice to have a deeper reason to play a game apart from finding items hidden in a Victorial fantasy world!

You won't need knowledge of the original Snark Busters game to play the sequel. In fact, very little connects the two titles apart from a couple of brief references to Kira, the main character of the first game. This doesn't really affect the quality of Snark Busters 2, so whether you're a newbie or a veteran, feel free to dive right in!

The hunt for the snark continues in this whimsical hidden object game with a wonderful, fun setting. It's easy to pick up and play, interesting to run through to the end, and a treat to look at the entire time!

Snark Busters: All Revved Up Walkthrough
General and Chapters 1-3

With that, on to the adventure!

Outside the Garage (Again)

Inside the House (Again)

Through the Snark Glass

(Back) Inside the House

Through the Snark Glass (Again)

Into the Phoenix Door

Into the Phoenix Door (Again)

When the secret compartment pops out of the side, grab the last lemon slice and brush fragment.

Wow! I have been waiting for this game since I finished the first one.

Snark Busters: All Revved Up Walkthrough
General and Chapters 1-3

With that, on to the adventure!

Outside the Garage (Again)

Inside the House (Again)

Through the Snark Glass

(Back) Inside the House

Through the Snark Glass (Again)

Into the Phoenix Door

Into the Phoenix Door (Again)

When the secret compartment pops out of the side, grab the last lemon slice and brush fragment.

Not so much a comment as a Please help me finish :) . Cant remember what the number was from the vase that I hit. I know the numbers are unique to the game being played, but is there any was to go back and check what the number was? Am frustrated that am close to the end of the game and I cant remember the number...I have the last two numbers and have tried to enter a different first number and try to open the safe door, but of course its not working...anyways, thanks if you can help me

Debbie -
Try going back to check the number. Good Luck!

I can't get past the Security control panel. My picture from the safe does not help. The numbers on the picture are 1,2,4,5,10. I assumed I needed to enter in that order. But the 3rd number does not work. I finally got the 1st 4 buttons to stay down by hitting them in the order 1,2,5,4. But NO button or switch works for the last entry.

So frustrated... I must be missing something.

For some reason, when I position the t-rex, his arms are in an 'up' position, so even though I've got his position right, it won't work. Has anyone else had this problem?

I've done everything, even for three rabbit, and I still can't get into the sixth door, all I get is a video in the car with grandpa. what do I do?