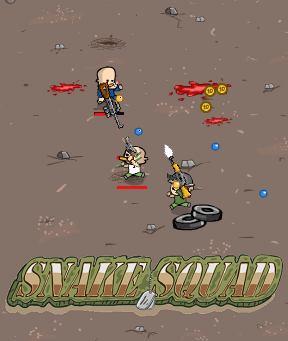 I don't know, but I've been told! But Snake Squad, an action-packed arena shooter by Yzi Games, has just gone gold! In this top-down arcade game, you control a grizzled, cigar-chomping soldier by directing him with the either the mouse or [arrow] keys. Shooting enemies will soon dot the war-torn landscape, and Cigar Soldier will automatically fire upon the closest one. To survive for long, though, you'll need backup. As noted by the reinforcement timer, every so often, a new squadmate will spawn on the field, each with various weapons and abilities. Move Cigar Soldier near them, and they will join your squad, following behind you in a snaking line. Each will fall after getting hit with a single shot, but every squaddie you collect gives you a boost of health. Slain enemies drop coins which can be used to purchase upgrades and new types of squaddies, and killing ten enemies in a row without suffering damage will give you a screen-clearing air strike, activated by clicking, or with the [spacebar]. Clear waves, collect cash, and rack up points for a high score!

There's not much of a story in Snake Squad, besides the running and the shooting. Still, the teeny solider graphics are viciously adorable, and the snaking mechanic makes gameplay feel surprisingly fresh. Snake Squad isn't interested in depth, so much as providing a fast-paced, fast-blasting good time, and it proves fun can bloom, even on a battlefield.

Is it just me, or is the game in a container too narrow for it? It looks like the sides are cut off...

It seems so Gavin. Very nice game, I'm having a little trouble with the 10th wave. I've gotten there with full life but I just get creamed every time. Soon...

It wasn't just you. Dimensions have been fixed. Thanks for the note.