It's a glorious day for snail lovers (all five of you). The time has come to send a snail into space! Our dear friend Bob had long been nursing dreams of buzzing around in a rocket and you can make his wishes come true in Snail Bob Space, the latest instalment in the point-and-click puzzle series by Hunter Hamster. You will follow Bob through his astronaut training, flight and adventures on an alien planet across twenty five levels. 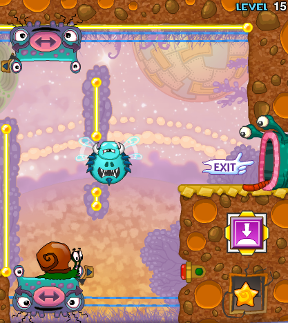 Use your mouse to press buttons, pull levers and platforms and control your snail buddy. Whatever the dangers, Bob doggedly marches on, so you'll have to keep him out of harm's way and safely guide him to the exit. Luckily, you can click on him to make him retreat into his house and stop moving, which works like a curious pause button. On the other hand, if you are forced to drum your fingers and sigh as he slooowly slides along, you can speed him up (this won't affect the enemies). Every level contains three stars, half-hidden in the background or behind tiny puzzles of their own, and they unlock funny space-themed pictures.

The physics aspect of the game is enhanced by the addition of a gravity button, so Bob can now stick to the ceiling as well as the floor – twice the fun! The difficulty is just right, meaning that it's easy to see what you're supposed to do, but putting thought into action takes some skill. Timing can be crucial and planning ahead pays off. Level design is imaginative, delightfully diverse and has a cute sense of humour. Add to this some cartoonish music and pretty graphics (who knew a snail could look cuddly?) and you've got yourself a perfectly entertaining lunch break puzzle game worth playing more than once.

I like the Snail Bob games. They're challenging but not too challenging, cute but not pandering, & they're loads of fun.

I particularly like how finding the stars becomes its own minigame.

I also agree with Marnen that it's fun to get the stars, but I was happy to get 2 out of 3 on some levels.