It's that time of the year when games get a snowy makeover and come up with holiday-themed plots. Snail Bob 6 Winter Story is no exception – everyone's favourite slimy hero has to save Santa! Snail Santa, that is. The point-and-click puzzle series has always been full of good cheer and silly humour, so the Christmas theme fits it as well as purple hats fit Bob. Santa has been kidnapped by a sinister hamster and taken deep into the woods, so Bob must travel through twenty-five puzzly levels to reach him. If you want to help him, you can guide him along the way. He moves on his own (and pretty quickly for a snail), so all you have to do is click on him, or press the [spacebar] to stop him, and turn him around by clicking a button in the upper right corner. 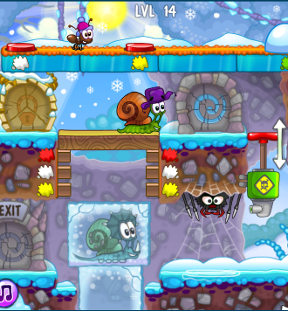 If you played Snail Bob 5, you'll recognise the gameplay immediately. The helpful ant friend who can step on buttons for you makes an appearance, and puzzle elements are largely unchanged. Most importantly, collecting three stars in each level still unlocks Christmassy mini-games which basically means you're getting five games for the price of one. But Winter Story adds a lot of its own special flavour: from the appropriately beautiful surroundings to the all-new level setups, it certainly feels like a solid game in its own right. What this installment really excels at is setting intuitive and entertaining puzzles in busy, colourful environments. At the beginning of a level, you might feel disoriented for a second, as the screen seems crowded with buttons, levers, platforms and all manner of background objects. Soon enough, though, the goal becomes clear and then it's just a matter of clean plan execution. The intricate level design also proves useful in hiding the three stars, and finding them is a special little pleasure. What with a tried-and-true format based on silly cuteness and clever puzzles as well as a constant string of fun additions, it's quite difficult not to love the Snail Bob series. Winter Story perhaps isn't as innovative as we can hope future episodes to be, but it's chock-full of seasonal joy and as heartwaming as only a smiling little snail can be.

There is definitely a lag in the mini games.

The bug can be overcome with a simple level restart.

Only Remove the single block of ice on the top level so everything is flat on top, then your snail won't get stuck, why i dunno :-) then you can continue.

sorry my spoiler was for the 3rd set of block on lvl 25...sorry for any confusion :-)