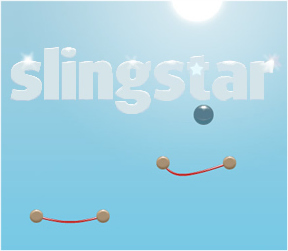 Would you like to sling on a star? Oops. ...sorry, wrong song.

Slingstar marks the 26th Flash game created and released by David Thorburn on his Teagames.com website. The pace at which he is able to create new games is remarkable! With this one, the most recent of his games, he has created a new game by combining two classic gameplay mechanics: the slingshot and the platformer.

Each level consists of horizontal strips of stretchy, flexible material on which a ball is bounced. You control the ball with the left and right cursor keys. The object of the game is to reach the top of the level by bouncing your way up, and collecting stars along the way for points. Find and collect the one blue-ish star near the top to complete the level and move on to the next.

Analysis: Although this game is similar to others, including Yoshio Ishii's Neko-Pachi and Tobby-Pachi games, I have yet to see a game with the same gameplay. As is customary with all of David's Teagames, the physics implementation is exceptional. The stretchy material reacts convincingly most of the time, and is quite an impressive feat in Flash. To keep the framerate down with all the physics computations in his games, there are no sound effects or music, though the graphics are generally appealing and efficient for the Web. The down side is that the ball moves as if in slow motion, which gets frustrating rather quickly.

Thanks go to grant0 for suggesting the game and for writing much of the review that I subsequently edited to add my own two-cents! To which he adds: "Beyond that, good luck!" =)

it looks so nice, but I don't know how to control this game. The arrowkeys don't give any movement or whatsoever on the ball or anyhting.

This game Drives me NUTS!!

Tammetuk - Think of the arrow keys more as a *force* to be applied to the ball in that direction, rather than as direct movement keys. They provide some movement, but don't expect much from them. That's part of the challenge.

GAH! This game is soo frustrating! The physics doesn't make any sense! (Or maybe it's just me and the fact that I didn't learn anything in physics class..) I was so excited because I tackled the first level on the first try, but the second level is so much harder! I can't even get to the 2nd tier on most tries. And if I do, I certainly don't have the momentum to get to the third!
Why are all the TeaGames so hard??

Ok, obviously posting a comment is good luck, because seconds after I posted, I managed to beat level 2...but now level 3 is way too hard. I hate those short tiers. The longer ones are hard enough, the short ones are impossible!

I have to agree with you Carolyn. Even after I understood how it worked, something about the controls and the movement for the ball just doesn't feel right.

Like all of the Teagames- very fun but very difficult..

A couple of things bugged me, though.. one was that tiers of the same length seemed to have different elasticities, that could be just me, though..
Also, the elastic band deals seemed to stick to the ball, or something.. the physics there were just kind of ... off.

Also I got annoyed because I kept trying to use the up/down keys but they did nothing. That's not the game's fault though, obviously..

often frustrating as hell. but still kinda cool, once you get into the rhythm of the game.

i thik it doesn't make sense that the bands seem tight in the middle but loose on the edges, but otherwise, great game :)

The physics on this are really really bad. Don't make any sense at all. I expect a little better from Teagames.

I got to level 6 or 7 on this game (didn't really keep track xP). If you think level 3's hard, just you wait. After a bit of practice, it's pretty easy to maneuver the ball around. It gets tough when there's those ball things in the way.

I completed the game (11 levels in total) and I have to say, I agree with everyone else when they say the physics are way off. You just have to accept the way the game is if you want to beat it, and maybe the fact that here it's 4am actually helped me. Oh well, good night. XD