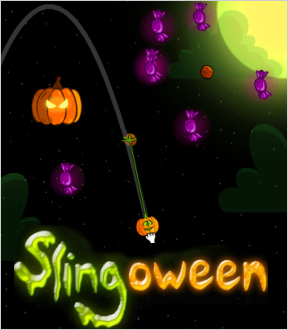 A short-but-sweet release from Ezone kicks off the Halloween season with Slingoween. Sling Fire hit less than a week ago, so it's surprising to see more goo-flinging so soon! Slingoween combines the rubberband-flicking action of Sling with the familiar climbing theme found in games such as Winterbells. It's a simple game with little more than earning a high score as a goal, but the flying pumpkins, ghosts and Halloween candy help kick off the impending holiday with style.

The jack-o-lantern Sling creature hangs from pegs placed around the screen. Click and pull back to stretch the Sling in any direction, then release to send it flying through the air. The goal is to collect as much candy as you can while avoiding the various spooks that saunter across the screen. Work your way higher into the night sky to rack up the highest score you can!

There isn't really any motivation to risk your life slinging to obtain a higher score. Anyway, you scale upwards faster if you simply try to reach for every grab. Twice as many points awarded to slinging while catching candy isn't enough in my opinion.

Nice game, though I feel that they should concentrate on making Sling Ice instead of randomly throwing a Sling-Or-Stretch game.

Fun distraction, but nothing more.

Can't wait for the next "real" sling installment, though...

This just isn't getting any love, is it? hehe. Fun addition. I like the holiday release, and am definitely surprised to see it so soon after the last Sling game.