From Dumb and Fat Games, creator of Phantasmaburbia, Sling It! (a sequel to Pollushot) is a quick-fire arcade game perfectly suited for satisfying your urge to break things while ridding the world of smoke-belching machines. It uses a simple-style difficulty progression that throws enemy after enemy in your face, challenging you to chip their metallic bodies apart and use the debris as a weapon. A bit of poetic justice, maybe? 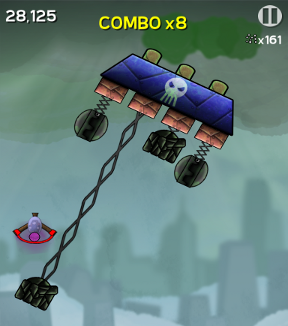 The controls can be toggled between single and double finger style, the latter of which may seem strange but works extremely well on tablets. Simply grab a bit of ammo in your slingshot, pull back, aim, and fire. The goal is to destroy as many enemies as you can while not getting hit by their various spikes, shots, shrapnel, and other crushinating machinations. One part avoidance, another part seek and destroy.

There's something innately satisfying about Sling It!. In addition to the fine set-up described above, you'll also encounter power-ups, different shot types, and around 40 different achievements. Best of all, the enemies are quite creative and give you a good reflexive and critical thinking challenge. It's not quite a flat-out destruction fest, just close enough for it to be a guilty pleasure!