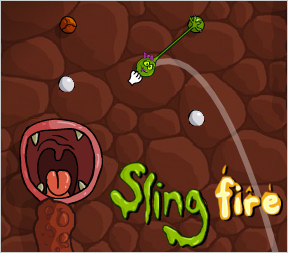 Sling Fire from Ezone continues the physics-based goo slinging action the first game in the series introduced just over a year ago. The fire element has been stolen from the Oozeville power source, which of course spells doom for the slime-based folk. Playing as Sling or Slingette you must toss your way through 50 levels of traps and puzzles to recover the lost element!

Sling and Slingette are made of stretchy goo and can be pulled and released like a rubber band. To pass each stage, you must turn all of the white grab pegs green by slinging onto them one at a time. Breakaway pegs, spikes and even fire pits stand between you and the blue vortex exit, and every five levels you must face off against one of the fire monsters in order to continue.

Sling Fire is more of the same goo-flinging fun we've come to expect from the series. A few new grabs make an appearance in this game, including fire cannons and beetles, but just about everything else you've seen in Sling or Sling Jr. Regardless, Sling Fire is a polished and well-put-together game that will have you laughing and slinging for a very long time.

great addition to the original Sling. Graphics are amazing, music is catchy, and the voice acting is cute.

The line that shows up to mark your trajectory is a nice little tool, but I find myself relying on it too much...maybe it'll push me to beat it on hard :)

Yay! I loved the original Sling so a sequel nearly had me singing Halle-hoohah down the road! Yeah, it's fun. Probably better than the first though im not sure. Will there be 7 more sequels, one for each element!

If you dislike that you rely on the line so much, you'll be glad to hear that it's not always right. For me, that counts as an annoyance.

I like this one even better than the first. For some reason, the first one just didn't hold my attention long enough to bother completing it. After playing through this one, I can't wait for the next :)

I'm on level 9 and for some reason the sling ball won't bounce off the platform in the middle - I just go straight to the lava/fire. Any suggestions?

Hah, if they continue this way, I'd definitely like to see Sling Space and Sling Magic.

Has anyone finished 35 yet? I seem to have changed all the whites to green, but no portal showed up? Help!

Wow, nevermind, I figured it out.

I beat easy, and I loved it. wasn't insanely hard, but it did test me a bit on the later levels. although, that one boss where you

have to fend off several/two (I forgot...) brain things while suspended over a line of wide-spaced red-fire grabs

it seemed to be entirely luck based, unless you can figure out angles insanely quickly. I erventually beat them when I rebounded very quickly between them, and landing on the exact spot the portal was.

I want that ol' coot to be a 'villain' in one of them - he tries to use them for something, like get water form the water one, or ice in his lemonade from the ice one, and accidentally drops it into a portal them blames the wierd things, which are actually IN that portal. the game'd probably be interspaced with cutscenes of him worrying, fretting, dismissing it, then eventually admitting it only to find out the things actually DID have it. hah, that'd be great.

The story part for some reason reminds me of Oddworld. Amazing voiceover, great gameplay, great story, fun game, challenging, flat out the best flash game I have ever played.

After getting all Gold Times...

you play a bonus level, pretty easy, and you can grab coins (which I have no idea what they do, but whatever) and when you get to the portal, you get a preview page of Sling Ice!

mradam, the same thing happened to me but after informing the people at Ezone about the problem they promptly emailed me saying they had found and fixed the problem =)

I remember playing the first Sling game... got to the last level with all gold times, brimming with excitement, positive attitude - then my laptop overheated. I am not exaggerating. Ahh, good times, good times. Sling Fire is so much like Sling 1 - luckily, i'm playing on a better computer this time. I'm really glad this game doesn't take points off for losing lives/getting damage. (half an hour later...) I WON! I was a bit disappointed by the ending though - I was hoping for a little demo of Sling 3, but, alas, nothing - just a crummy Sling 3 picture/advertisement. Love the game, would love it more if it had just SLIGHT bit more to it. Still good, seems to take a long time though.

Ainegue, I guess it's a good thing that you weren't playing the second game on your laptop. If the first game could overheat it by itself, then just think what Sling Fire could do!! =P

Anyways, I completed both games, I can't wait for the next one!

omg this is the best flash gaem i have ever played most of them are dead boring but this one is great i'm really looking foward to sling ice and espeally sling water mate u r a genious for creating it :)

sling fire was not that hard.it was pretty easy.sling is harder than sling fire.has sling ice come out yet????
cos i wanna play it

Have any of you hears of Rubber Dubber? It`s a downloadable game with most of the principles that drive Sling`s gameplay, with pretty graphics, effect and, the cherry on top of the cake, a full fledged story spanning 90 levels . Have a look here: http://www.bigfishgames.com/download-games/2110/rubber-dubber/index.html