Every play a video game for too long, then all night you have game related dreams? Yeah, we've all been there, but what if it wasn't a dream. What if the baddies really were out for revenge on your helpless sleeping body? Wouldn't you want someone to give you a hand? Help out the monstrous gamer of Bad Seed's Sleep Attack TD by destroying the enemies before they destroy you. Unlike something like Desktop Tower Defense where you make your own path with towers, Sleep Attack has set paths and predetermined spots for towers. There is a twist, however. Each playing field is laid out in concentric circles which can be rotated to change the paths the creeps take. 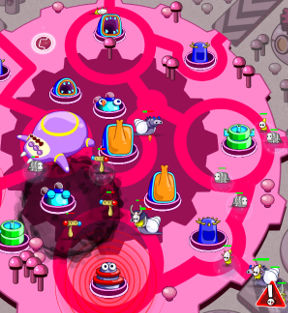 In the middle of the screen is the sleeping monster, and the goal is to watch over it as it sleeps. Swipe to rotate the inner or outer circle. The game pauses as you rotate the rings, but you can also hit the tactical pause button (the clock on the right side of the screen) to pause as long as you need to figure out the best paths, and to place and upgrade your towers. You start with a limited number of spots in which to place towers, but as the waves progress, you'll notice new tower placement spots appear. Each tower and each creep have their own strengths and weaknesses, and you'll have to coordinate them if you want your layout to be its most effective. That's where the encyclopedia comes in handy. From the level select screen, or the regular pause screen while in level, tap the book icon in the bottom right to get data on tower types, enemies, and power ups. You earn magic beans as you play, with which you can purchase single use power-ups. Beans are also available as an in-app purchase, though I found the game perfectly playable without spending any extra cash.

Sleep Attack TD is good frantic fun, with a hefty does of strategy thrown in. There are a good variety of enemies, and some killer boss levels. There's also the sheep. If you can get a sheep safely to the snoozing monster, you gain a life, but If it dies anywhere on the board, you lose one. It's a nice tactical addition. You get to choose a certain number of towers types to take into each level, so it would be nice to know what types of enemies will be on a level beforehand. The art is lovely and is whimsical enough to look like something out of Adventure Time. Though I did enjoy the music, I thought the sound effects got old fairly quickly, and you can't turn them off without also killing the music. It's been awhile since I've seen an innovative tower defense game that works as well as sleep attack. So carve out a chunk of time to sit down and check this one out. Just don't nod off while you're playing.