A luxurious stay at the top floor of the Skyhill hotel turns your suite into a cage when biological warfare strikes the city. With the world in the grip of war, everyone knew it might happen, but right here, you're the only one who sprung for the hotel's state-of-the-art biological defense capabilities, and everyone else has turned into a flesh-hungry beast, which has to be the worst attempt at a hotel amenity upsell in history, right after those little candy bars in the in-room fridge. Your goal in this turn-based indie RPG from Mandragora is to make it all the way to the bottom floor, but it won't be easy, not least because roguelike elements mean a random experience whenever you step out your door. Skyhill is a fun twist on the classic survival horror game formula, with an appealing aesthetic, though repetition may set in too early for some. 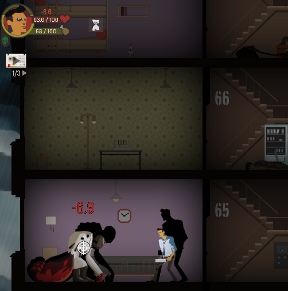 The game is mostly played with the mouse, and pressing the [spacebar] will highlight everything useable in your area. In your room, you can craft new things or take a nap if you need to heal, but eventually you'll need to go out. Hunger motivates you, but it's also an important statistic, since you spend it to move from room to room, and if it runs out, your health starts dropping instead. When you encounter an enemy, turn-based combat begins, and you can either just click to attack them directly, or click the targeting crosshairs at the bottom of the screen to choose to attack a specific part of their body for a chance at greater damage if the blow lands. Slay your foe and get experience towards leveling up, which boosts your stats, but if you die, well, you'll need to start all over from the beginning... though you will be able to choose beneficial perks this time around! 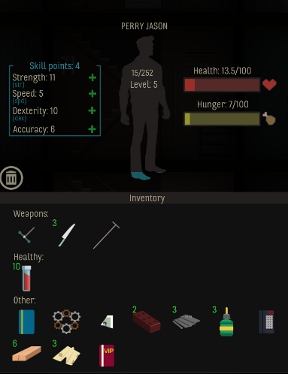 As with any game with roguelike mechanics, your success or failure in Skyhill often comes down to how kind the game feels like being to you. Sometimes you'll find copious amounts of food and healing items, sometimes you'll be starving and near death your entire run, and it all depends on what you find when you search your surroundings. Skyhill starts to feel repetitive early on, unfortunately, with its clicky, straightforward combat and limited pool of enemies and rooms, but its core concept of fighting your way down through the hotel and uncovering equipment, and even bits of plot or other random special encounters, actually works quite well to keep you moving forward. The mechanics are simple enough to pick up almost immediately, with the crafting adding just enough extra depth. It's nice that you can choose to use some crafting items for limited benefits if you can't reach your crafting station, or turn them into something more powerful if you can, so most everything feels useful no matter where you are. You can even improve your room to unlock more recipes and benefits. Other elements, like the frequent need to repair floors for electricity or travel, can get a little frustrating, but add an extra layer of difficulty when deciding whether to press on or give up.

Skyhill's shadowy visual style actually looks pretty great, with moody lighting and a mellow soundtrack, so it's easy on both the eyes and the ears. Players hoping for something more story-driven will need to keep hoping, since any plot is relegated to journal entries and the like, but as a casual, pick-up-and-play strategic horror roguelike, Skyhill works quite well. There are, sadly, still a few bugs to be found, as a few times I had the game simply stop accepting input during combat, but the autosave function meant I never really lost progress. Skyhill may not resemble any hotel I've ever seen, but it's compulsively playable, and feels like it would have been a good fit for mobile devices with a bit of screen fiddling, too. It's a stylish, creepy spin on the roguelike genre, though it never actually gets scary, and if you've been looking for something different this could very well be it. Skyhill tries new things with familiar mechanics to deliver a ghoulish roguelike RPG that will keep you tossing hotel rooms for rotten apples and mutant blood one floor at a time.

It'd be neat if this game took place in a lighthouse instead of a hotel. If only because it'd mean JIG posted three games about lighthouses in a row.

I think it's certainly in poor taste, and an example of something not thought all the way through. Other games like Rogue Legacy have tread into similar territory by offering up what can be seen as disabilities as "perks", and using what is essentially a type of mental illness similarly here shows the developers (and probably society in general given how often "I'm bulimic!" is used as a joke) could stand to give a little more thought to the reasons and motives behind "mechanics" they introduce if they aren't trying to make one of those deliberately offensive to everyone games.