Claret Spenser doesn't care much for the outside world, she's happiest working in her airship repair shop. Machines are easier to deal with than the aristocracy of her floating city or the winged Skyborn race that conquered the humans generations ago. But, of course, her brother just had to sell the family shop and promise her hand to that cravat-wearing rich boy. And that rich boy just had to be on board his air ship when Claret decided to "borrow" it to make her escape. But hey, while she may need more than elbow grease to get out of this jam, a girl handy with a rivet gun should never be underestimated. Skyborn, an RPG from Dancing Dragon Games, is a unique whirlwind of a fantasy-steampunk adventure that demonstrates just how far the RPGMaker framework can be pushed in the hands of talented designers. 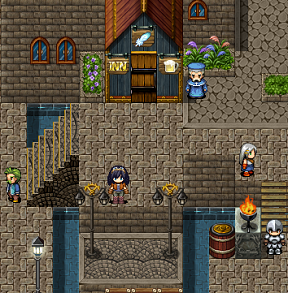 The basic mechanics of Skyborn are typical for the JRPG genre. You lead a party of characters exploring different locations, interacting with NPCs, completing quests, fighting enemies, gaining experience points (XP) and developing skills. Use the [arrow] keys along with [Z] and [X] for movement, interaction, and accessing the status menu. Intuitive mouse controls are also available if that's more to your liking.

Battles are turn-based and prompted by encountering visible enemies roaming about the map. A unique threat-based system determines how enemies interact with you, so depending on your party's actions enemies will focus attacks on characters that appear to pose the most danger. Once killed, enemies do not respawn until a location is left. A nice touch is the battle-difficulty adjuster, which should alleviate frustration for those in it just for the story and give a challenge boost for those here for the monster bashing. Other unique elements include "Exploration Points", glowing bits of scenery which reward examination with XP, and the Augmentation system which Claret can use her to upgrade weapons and armor with various jewels and items.

Analysis: Skyborn aggressively wants to make a good first impression. Upon starting the game, you are blasted with an enormous quantity of quality: beautiful music, gorgeous art, an intriguing storyline, and a fully realized steampunk world. Relatively short for an RPG (about 10 hours of content), Skyborn keeps all its pistons firing throughout the whole experience, and it makes for an exhilarating time. Part of the game's immediate success comes from its characters. They're fairly archetypal, but intensely loveable, Claret in particular. If Lucca, Agatha Heterodyne, or Kaylee got to star in their own game, one has to think it would look at least a little like this. 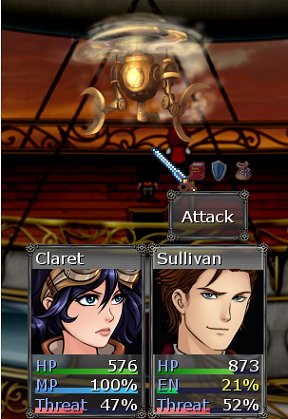 Of course, the wonderfully expressive character art that accompanies the text does at least half of the work. They give storyline conversations a wonderful sort of visual novel-styled gravitas that adds a lot to storyline depth. (The comparison is particularly apropos: while text-heavy is probably too strong a term, Skyborn is certainly not text-light.) True, many of the NPC and enemy sprites feel a tad generic, and the steampunk elements are much more unique than the fantasy ones. However, the world of Skyborn captures the essence of the living, breathing, slightly dingy beauty of an industrial city as well as any of its 16-bit styled inspirations. Also of note is the game's beautiful (and original) background music. Release a soundtrack CD, stat!

Skyborn's plot is as captivating as its world, though the character archetypes in play admittedly make some of the twists predictable. Then again, good writing can breath life into even the most rote of storylines, and that is not something Skyborn lacks. Dialogue is crisp, and factions of the fictional world are allowed to develop and clash in a way that's complex without being convoluted. Things sometimes get a little lost during dungeon crawling/maze sections, though the complaint there would be that they're unnecessary and a little confusing to navigate but not at all dull. A slightly artificial lengthener for a fairly linear, fairly short, and fairly easy game. Still, it's hard to complain about having more monsters to shoot rivets at, and overall, Skyborn keeps the pace fast right up to its rollicking conclusion. Some plot threads aren't entirely tied off, but hopefully that's so that a sequel can be made. Pretty please?

Skyborn is, above all, stylish, but not in a way that gives its content short shrift. Rather, it gives players what many most desire in a role-playing game: a peak into a world different from our own, but filled with characters that we can adore, and stories that we will remember. Highly recommended to anyone with even the slightest love of RPGs.

A wonderful light RPG with fun characters, witty dialogue and interesting combat. And at 10 hrs a JRPG I should have the time to finish. The crafting could be explained a little clearer but still a nice distraction.