Sky Tourist from Three Legged Egg has finally done something new with the physics platform genre made popular by Doodle Jump! Instead of hopping or flying or running or crawling, you maneuver a boy dangling on a wire suspended between two rocket ships. By changing the rockets' locations in relation to each other you can slide left and right, collecting cubes and taking a more extended look at the great stuff the universe has to offer! 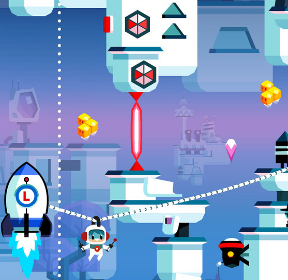 Petey is in the mood to check out some sights. Sneaking past his mom and dad (who are watching a show about a giant bear who destroys buildings with laser vision), he hops aboard his homemade traveling device and sets out to gather souvenirs. In 75 levels across three worlds you'll help Petey by adjusting the left and right rocketships with your thumbs. Slide them up and down to increase or decrease Petey's ascent speed. Move them in opposite directions to slide him in a particular direction. You'll want to avoid the unfriendly locals and pick up as many cubes as you can, as well as take some pictures of things that are worth remembering. You know, like a tourist!

Sky Tourist is filled with great things to see, and once you get the hang of the tethering control mechanism you'll kind of want to use it in other games, too. The difficulty doesn't really spike too much, always offering checkpoints and backtracks so you don't get too frustrated with the inevitable failure. The music and artwork are both fantastic, adding a shiny cherry atop the already delicious game. It may be a little simple in design, but Sky Tourist will give you new reason to pick up your mobile device and start climbing to the sky!

Anyone knows how to get access to bonus levels? Just perfected Plumia, and it didn't unlock.