Strap on your pistols and saddle up, pardner, there's a new card-based strategy game in town! From Cryptic Comet, the maker of Solium Infernum, comes Six Gun Saga, a game that combines cards, heavy strategies, and all the fierceness of the wild, wild west. Choose your boss then go at it with guns-a-blazing! Build up your town (or sell your cards) to make money, and form posses, then use them to collect victory points by defending story cards or just blow your opponent's men away! Turn by turn, you will either play as, or match wits with some famous characters like Wyatt Earp, Dirty Dave Rudabaugh, and others. 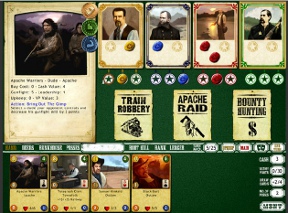 You and your opponent(s) will relive the glory of the old west by assembling posses to wage war on one another. The goal of the game is simply to earn a set amount of Victory Points before your rival does. In order to do that, you will need to move your posses out of the bunkhouse onto a story card and hold them there for as long as you can. It's not as easy as it sounds, since you not only have to contend with enemy bullets but also real world problems like cash flow. If you cannot afford the upkeep for your gunfighters, you won't be able to keep them around, and you'll find yourself en route to Boot Hill. 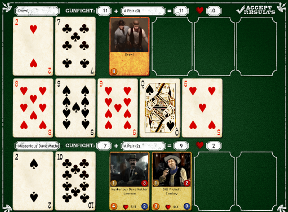 Controls are simple, using the mouse to do just about everything. The game is turn-based with each turn divided into four phases: upkeep, main, draw, and the turn's end. The very first thing you'll do is make sure your ledger is balanced, paying upkeep costs for certain cards with the amount of gold in the bank. If you can't afford the payments, you'll have to raise the cash by selling cards until you break even. Once the main phase begins, you can create or move posses, play cards in your hand, or start a gun fight by playing something as a poker card. There are even card actions you can utilize to directly and immediately affect the gameplay. The draw and end phases then sweep in to tidy things up, and the game continues until the turn limit is reached or one boss has earned enough victory points to win the game. 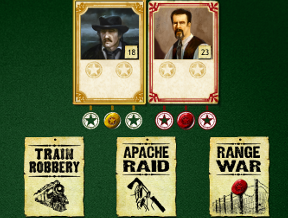 Analysis: Six Gun Saga masterfully mixes the concepts and gameplay of a collectible trading card game with poker and incorporates the entire mixture into a spaghetti western motif. The artwork on the cards has been exquisitely drawn, and the music could be ported right into the soundtrack to a Clint Eastwood western and not miss a beat. Many of the characters portrayed on the cards are famous gunslingers from history and fiction, like Doc Holliday and English Bob (a character from 1992's Oscar-winning movie 'Unforgiven'.) The rhythm of the gameplay is fluid, and there seems to be a real satisfaction when you win a poker game/gunfight, that you may not think would meld as well as it does in a card game.

You should prepare yourself to lose a few times to the AI before you taste success. The learning curve on this game can be considered challenging. The game does come with a extensive manual, but it reads like a textbook and can be a struggle to get through. Unfortunately, the game offers no in-game tutorial, which would be a great benefit to it's players. You are left to your own devices to figure out what the best strategy is to win. However, once you get the hang of it, Six Gun Saga can play like a good game of chess, and give you a great gaming experience. Best of all, fans of the western genre will enjoy being transported back to the Old West, without the fear of being 'gut-shot', being hanged for cattle rustling, or contracting a nasty case of smallpox.

A tutorial might be helpful (unless I've missed something somewhere). Looks like it might be fun but the rules explanation are a lot to be desired. Gave up after 20 mins - going to bed has more attraction.