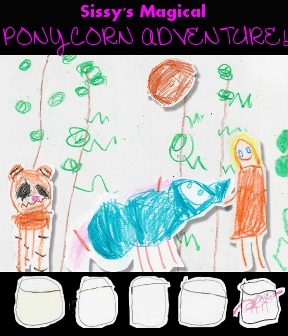 Sometimes I'm pretty sure developers are trying to kill me, especially in this case, where Sissy's Magical Ponycorn Adventure is so adorable and funny I just want to keel over. Created by five-year-old Cassie and her father (33 year old Ryan), this adventure game is silly, wonderful, and sunshine in your browser. The game follows Sissy, who "friggin' LOVES ponycorns", and hey, who doesn't? After all, they're ponies and unicorns. You can't lose! But Sissy doesn't have any ponycorns, so she's going to go get some with your help. No, it's alright, you don't need to have your eyes checked; you read all that correctly.

Playing the Ponycorn Adventure is simple; just click to move and interact. The biggest issue you might encounter is trying to figure out just what you're looking at from time to time, but click on an object and Sissy will tell you what it is... even if the explanation is just as strange. In short order, you'll have a bunch of jars to put your ponycorns in when you find them (it's cool, I poked some holes in the lids), and you'll have to help Sissy travel through rainbows and solve the rather unique puzzles on the other side using little-girl-logic. If you don't have a little girl handy to help you, or if you were never one yourself, don't worry... just click around, bust out a few random magical powers, and BAM! ponycorns. Awwwww yeah.

Sissy's Magical Ponycorn Adventure is sweet, funny, and maybe the best surprise to come across my desk in a while. It's not complicated or challenging, but it put a smile on my face, and for that it gets a massive high five. The dialogue is cheerfully absurd, the mood is light, and even though the whole thing should only take you around five minutes to play, it's definitely time well spent. Sometimes you want to save the world, program robots, or solve complex logic problems. Other times? You just want to leap astride your ponycorn and ride on off into a rainbow.

Be sure to click on the ponycorns' jars after you've collected them to learn their names.

My favorite is the Pink Ponycorn.

Oooh!
Almost as cute and whimsical as a Minoto game!

And the names made me laugh out loud.

No, I'm not going to put them here. You have to go find them for yourself.

Yessss! So cute.
A little hard to tell what you can click on in one spot, got hung up for a minute, but I got through it.

Just kidding - pretty sure you can do this one on your own!

This game is so friggin' adorable! I really hope Ryan and Cassie come out with more in the future.

Sissy: "You're bad because you're a lemon"

omg was that cute :D

That made me smile

wow, this was great, so funny and cute.
i really liked how with everything the girl describes my mind instanly imagined the dad asking her to draw the thing and this is the first thing she drew.
or she drew something and in her mind it was a dragon or whatever so he put it in the game.

That is too cute! I bet there would be a lot more creative games out there if there were more fathers who could program... that would be such a cool project for a kid to do!

This is officially the greatest game ever.

"What a delightful butterfly"

That really made my day, especially with an exam this afternoon. Thank you JIG!

This game should could puzzle game of the year!

i think i got a cavity from this

What a delightful game! It was a pleasant break from the escape games I usually play.
Her voice makes me wish that I was a little girl again.

I tried to get my sister to help me create a game (we're 8 years apart, so I'd be ~13 around the time she was ~5) but I never finished it, so it's pretty great to see something like what I was trying to do and executed better than I would have done, too.

im ready for some ponycorn 34!

Oh god, I played this in a 14 Locks nausea-induced state.... definitely need a lie-down now.

in the end i thought that it is the

bear that is still nice not the tiger :P

I LOVE THIS GAME

Your game is loved a lot of japanese.
This game makes me happy.
thank you very much.

OMG - go to the website - they have tshirts and ponycorn stuffies.

My fav tshirt "I am an evil lemon!"

Although I kind of want one that says "That's what you get for being evil AND a lemon!"

I remember drawing just like this a long time ago... *wistful*
Oh. Wait. That was, like, a whole 7 years ago.
Anyway, I love Sissy's logic in this game, especially the way to snag a ponycorn from a hungry tiger! By far, my favorite line is, "Put me in a jar, sissy." xD I don't really know why that's funny at all, but it certainly made me have a good mood. (I forget the exact quote at the moment).

This game is ADORABLE! I love the green ponycorns name

I friggin' love this game! It has such wonderful voice acting (♥).

Only one problem: Its not MY little ponycorn.

The only thing more adorable than this little girl's drawings is the fact that her dad was committed enough to make a game of it and include funny voices for the characters. It takes a lot of heart to be the voice of an evil lemon and then put it on the internet for the world to hear. :)

Is anyone having an issue with the game displaying properly? I can't complete it because the right side and lower edge of the game don't show. It's like it weirdly magnified inside the window and is offset. Adorable game, though!

I had the same display problem and was able to adjust it by right-clicking in the game window and choose Show All. Presto!

Queen of the Night

2,659 Views
8 Comments
chrpa— Jayisgames needs your help to continue providing quality content. Click for details Rinnogogo locked you in a beautiful garden surrounding a locked house. First you need to explore the garden and find a way how to open the house...  ...