Sir, You Are Being Hunted (Alpha)

Big Robot's Sir, You Are Being Hunted, currently playable in Alpha (note that purchasing this counts as "early access" and allows you to play now and receive all updates free), is one of those weird, wonderfully clever little indie games that I live for. It's a stealth-based survival game where you play a resourceful British soul who winds up stranded in a procedurally-generated alternate reality because of reasons, and must search for the missing pieces of the device needed to bring you home across a ruined landscape. The twist? Well, as the title suggests, you're being hunted... by dapper, tweed-wearing, mustache-having, gun-toting robots, no less, who think it's fine sport to track you down with their considerable resources and shoot you dead. Which is sort of unfair, since the last time I suggested doing that at our staff picnic, I was being "weird again", but make a game about it and everyone's on board! But no, whatever. It's fine. But if you guys think I'm sharing my dead rat with you, you're sorely mistaken. 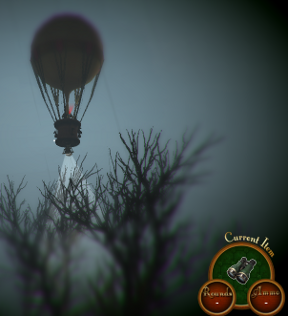 The game is played from a first-person perspective, using the standard [WASD] for movement, [spacebar] to jump, and mouse to look around. You'll learn early on that this isn't the sort of game you can just blunder around in, as you're both out-numbered and out-gunned, and you'll need to use your wits to survive and search the five enormous islands for all twenty-four pieces of your device. If you're spotted by a robot, they'll continue to pursue and attack you until you lose them, which is best accomplished by using the tall grass for cover by sneaking around in it with [C]. The indicator at the bottom-left will show you how visible (and thus how readily bullet-ridden) you are, so pay attention to it and move carefully, but do move, since robots will head for the last place they saw you and begin methodically searching the area. If you're wounded, you'll begin to bleed out, and you'll need to bandage yourself before you die. Since games can only be saved at the starting point and boats, dying is a bad idea at the best of times. Arriving in this hostile new world empty handed, you'll have to scavenge everything from weapons to food and more from the eerily silent towns scattered around the countryside... or take it from the bodies of destroyed robots, if you dare.

As time and days pass, you'll need to worry about food, too. Luckily, the surrounding countryside is full of hauntingly deserted towns and shacks, all of which can be searched for food and supplies. Some of the best food comes in the form of hunted animals (currently only available as loot, with hunting planned for another update), but they must be cooked, and the smoke from a cook-fire will draw attention from miles around. While you can technically fight if you're fast, careful, and armed, considering how few shots it takes to take you down, stealth and distraction combined with laying traps for your robotic foes is by far your best weapon. Night is often best used to your advantage, making it easier to spot the sinister red glow of your pursuers in the distance. With robot hunting parties, robotic hounds, and even robot-manned hot air balloons with searchlights scouring the countryside, the odds are stacked against you. Fortunately, you're scrappy, resourceful, and this is just beginning. Unless you're gunned down in the back while you're running from Mr Burns's robotic hounds while clutching your stolen loaf of moldy bread. Again. 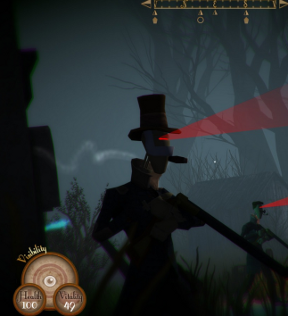 From the moment I heard about it, I knew this game and I were meant to be, and having finally gotten my hands on this playable Alpha build, I can happily say my opinion remains unchanged. It's a brutally hard, deliciously creepy and tense game with some of the best atmosphere around. The mood and style is gloomy, and hiding in the grass on your belly listening to armed assailants clank past just feet away never fails to make you shiver. The ability to play as Sir or Madam and have the in-game text and dialogue reflect as much is a welcome touch, though probably not that helpful if you're someone who identifies with neither gender. The game's overall tongue-in-cheek tone is very well handled, adding to the overall surreal vibe when coupled with the eerie setting and premise. The actual gameplay itself feels like a trial-by-fire, with very little being explained to you beyond the basics. You'll need to figure out for yourself what's useful in your hurried looting of abandoned buildings, learn how to lure the robots away from your portal pieces when you find them... or how to take them out as fast as possible.

Since you only heal when your vitality is high, how fast it depletes just from walking around seems a little overboard. As a result food is always a concern, and thus so is your inventory, which can be frustrating to handle since you have to right-click and select the option to use anything. Since the game doesn't pause when you open your inventory and things take up real space Resident Evil 4 style, why can't we then rotate and Tetris them around to make the best of our meager space, also Resident Evil 4 style? Also, what's so special about the rocks you find in houses that only they can be picked up and used as ammo or distraction? I assure you, I'm not too proud to use a common ditch rock, especially when they're so good at making a patrol of bots fall for the ol' "WHAT'S OVER THERE?" trick.

At the moment, while the game is playable, you're definitely buying into the potential of the product as a whole. With so much planned for simple aesthetics and gameplay additions like new enemies, biomes, hunter-gatherer systems, and even multiplayer in the future, at the moment you might find Sir, You Are Being Hunted a little bare-bones after a few runs. There are also, as you'd expect from a game so early in development, a few bugs still skittering around, as well as some amusing quirks such as boats sitting in landlocked bodies of water still somehow being able to carry you to the next island. (Click your heels, close your eyes... and believe.) But make no mistake... it does have enormous potential, and what exists at the moment is a lot of fun, provided the idea of huddling in cold, wet grass listening to hunting parties scour the area for you while you clutch your last rock and mouldy scrap of bread sounds like fun to you. This is one to keep your eye on, and one I'll keep coming back to over and over... no matter how often it kills me.

I'm DYING to play this game! I'm thinking of buying now, maybe it'll be cheaper than buying when it's done. Besides, "being done" seems like a superfluous concept nowadays. Games go on for years in alpha, beta, then gamma or whatever.

I actually don't know that it's going to be any more expensive when it's finally finished, or at least I can't find any information to that effect. The main benefit to buying now rather than later, as I see it, is both getting to play (yay!) and supporting the developers with both your cash and your feedback (also yay!) so that the final product is the best it can be. :) The game is completely playable now, but with how much they have planned to add, the finished product seems like it has to be a long way off just because of how ambitious it sounds.

It can be played now and is a lot of fun! It can certainly be challenging as you skulk through the undergrowth hoping to sneak by the buildings to pick up what supplies have been left behind. Weather effects are appropriately dreary and add to the atmosphere.

I honestly thought i'd like this game. I'd been following it for at least 1/2 a year to a full year now but I'm dissapointed by what I've played. It's lacking in the "game" department, and honestly isnt very intriguing at all. It's just lacking a certain something that makes games fun in my opinion, namely engaging gameplay. Running around picking up items, having to figure out what they're used for and where, and avoiding are really the core of this game.. and the avoiding portion really doesnt feel as ominous as I'd hoped. It's more or less from what I've seen either I'm dead before I can really do much, or the hunters stand around and kind of mill about, not doing much at all. I may try it again once it's far far more complete than it is now, but for now I cant recommend this game.