Sinjid: Shadow of the Warrior

Before the great ninja's final doomed confrontation with Warlord Baka and his Fallen Army, Hattori, the protector of the land, delivered to his friend Fujin the only thing Hattori had left to care for: his infant son, Sinjid. Fujin secreted the babe to the great mountains of Hejstu. There, for the next twenty years, Fujin would train the lad, to combat the Fallen Army that still scourged the land. Today, Sinjid is ready in mind and body to face Warlord Baka, but in combat experience he is lacking. Thus, Fujin has sent Sinjid to the Shadow Temple. Inside the temple resides the great Human Gateway, a portal that can transport a single warrior to the locations of evil men across the land: from the lowliest thief to those like Baka, who seem nothing more than demons in human guise. It is there, at the final stage of Sinjid's training, that we pick up the story... Infrarift Entertainment presents Sinjid: Shadow of the Warrior, an arena RPG. 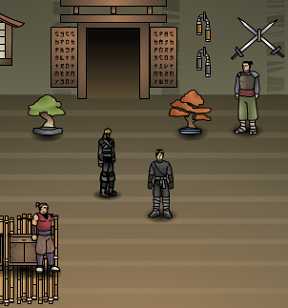 You start by selecting which class of ninja your character will be, and thus your starting stats and abilities. Move Sinjid with the [arrow] keys and interact with different characters or move to different areas by pressing the [spacebar]. Going through the Human Gateway will start a turn-based battle against increasingly dangerous foes. Victories will give grant you gold, to be spent on various weapons, items, and armor, as well as experience points. Gain enough experience and you'll gain a level, unlocking new skill points to allocate and magical abilities. There are also various sidequests around the temple to complete, and other optional gates to open where you can test your abilities against even greater foes. Defeat all twenty enemies, and you may leave the Shadow Temple for the final confrontation.

Though he was just one member of the team, the fact that Sinjid was in part developed by Krin, author of the the massively popular zombie RPG series Sonny, should definitely pique the interest of all looking for the hidden gems of browser role-playing. After all, if there's anything the internet loves more than the undead, it's ninjas. Being from 2005, Sinjid's ambitions are, of course, tempered by the then-current version of Flash: things like manual saving or scene transitions do take a little getting re-used to. However, the limitations of the engines gives the game a charming retro quality. (Do browser gamers feel the same sort of nostalgia for Flash 7 that others do for the NES or Gameboy? Well, why not?) It helps that Sinjid was ahead of its time when it comes to content, and its battles and strategies hold up quite well even today. The story is a standard tale of vengeance, but effectively told, and though the action is largely confined to a single temple, there are quite a few nooks and crannies to explore and secrets to find. All in all, Shinjid: Shadow of the Warrior is a solid role-playing experience and, with its long-awaited sequel just released, this is the perfect time to see where the saga began.

Play Sinjid: Shadow of the Warrior

...apropos, as with all the people involved, and given how text-heavy it was, there really should have been a better spell-checker. (That stuff will throw people out of your intricate story! Take the time to do it.)

Very balanced game. I'm always impressed how the grinds are thought out, though I suspect once I get to a certain point the items won't be as useful. I like the shielding especially. (Also I like that currently my dude resembles someone rhyming with bub hero.) Of course if grinders are sandwiches to you, then... more fun for us!

Related to the text annoyance -- if you're going to spend all that time and energy making it "look Oriental" then why not make it look, oh, Asian? This baffles me. In fact it would be easier to draw the spare, organized aesthetic. Like why bound books? Why a buffet when it could be a food stand? (Where are the stools, say the part of my soul still in a night market.) I understand that it's fantasy, but the otherwise interesting world looks slapdash when about ten minutes on the internet yields actual visual references. Those bits of carelessness trip up what's obviously quite imaginative.

Does anyone know if this game is related to the recent ArmorGames release with almost the same name, "Sinjid?"

What does it mean that he's from 2005? Is this an old game, recently released? or just a new game on an old engine?

Regarding what somebody wrote about authenticity of Asian culture... +1 vote for that. Some of the names are clearly Japanese, but others (like Sinjid and Hejtsu) are incompatible with Japanese phonology. Come on, it's not that hard to find more real Japanese names.

Also, the review has a link labeled "Shijid" pointing to a URL that has "Shinjid", and a graphic that says "Sinjid".

I got as far as the Emerald Temple, with the Dutch tradesman. But then I can't climb up the temple, beyond the 2nd storey. Where am I supposed to go from here?

[Typos fixed. Thank you for pointing them out! :) -Jay]

I feel like I just stepped through a portal in time. Did something happen to make this game relevant again, or did you guys just miss it the first time around and felt it deserved a review?

I was quite surprised to see this game back up on the review-table. Not that it isn't an amazing game that has also aged very well, but I have played it about five times now.

Also, the fact that a new one came out is a very pleasant surprise, and I expect to not being able to do anything productive at all this weekend.

Though our focus is on recent releases at JayIsGames, we are always looking to add quality non-recent works to our gaming database. Fill up that suggestion box!

I wish to make clear that this is a different game from the Sinjid title recently released on Armor Games. The latter is made by the same people, and is a semi-sequel, semi-reboot that does that confusing thing where they don't number it, or give it a subtitle. This review here covers the turn-based RPG from 2005. When our write-up for the action RPG from 2013 is posted, I imagine we'll be able to clear up a little of the confusion. But yes, the fact that a sequel/reboot was on the horizon probably had a little to do with prompting our feature.

Alright, having now wasted all of my Friday, I can now safely determine that I still like Sinjid: Shadow of the Warrior better than its newer sequel.

Except for grinding for cash through the medicine man, that is still annoying, and it's even worse now that I'm using a trackpad to manually move every leaf/bottle to and from my inventory.

Play a Shadow Ninja, use Speed Strike, and then you only need to rely on Speed for both offense and defense. And Speed Strike's damage is percentage-based, so it scales very well with your level. Grab the rest of the magic powers for healing and recharging, and you're good.

Any other good builds?

Aegeus, if I remember correctly, that was the build I used back when this game was new. It was the only one I could get to work for me. SOTW still stands out to me as one of the best flash examples of the turn-based arena combat genre.

And kgy - I like SOTW better than the new one, too. Although the new one is still pretty fun.