Originally free for iOS and Android and now available in your browser, Nitrome's high-difficulty arcade game Silly Sausage in Meatland is all about stretching your weiner dog as far as you can, nabbing gems along the way, while avoiding all sorts of deadly hazards. Use the [arrow] keys to begin moving... your sausage pup's hindquarters will stay planted while the rest of him stretches out in any direction, even wrapping around things, until he touches a surface he'll stick to and the rest of him will snap forward to catch up. If anything touches you, including anywhere on your stretched-out sausage body, you'll be snapped back either to the very beginning, or the last checkpoint you spent your gems at to activate. Though it starts out easy with a few innocuous floating spike balls, soon you'll have to deal with whirring, moving sawblades, treacherous pipe tunnels, locked doors, and more. Think you have what it takes to make it through? 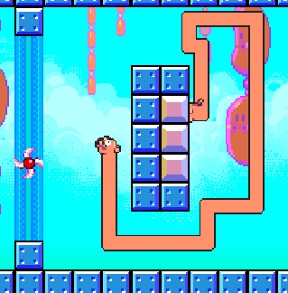 If this game seems familiar, you probably played 2011's Silly Sausage, which had the same basic concept, but in a level-based format. Meatland doesn't feel like a sequel so much as a different adaptation, and it's one that largely works very well, especially for the casual, pick-up-and-play mobile crowd. Checkpoints feel generously and fairly placed, with gems rarely being an issue to activate them despite their costs being a little unpredictable, and the amount of different obstacles and unique terrain effects you'll encounter keep things fresh and challenging as you go. While the controls are responsive, our putty pup doesn't have his movement more restrictively gridlike, as in the original Snake games, so it's easier to brush up against hazards. Nitrome's signature pixel artwork looks fantastic here, apart from a few minorly morbid background meats with faces in, uh, arguably uncomfortable situations, and the whole feel perfectly returns you to the bright, addictive arcade days of your childhood... unless you're too young to remember when arcade cabinets didn't require plastic cards to swipe and or come with polygons, in which case, get off my lawn. Silly Sausage in Meatland is challenging, bizarro fun, all wrapped up in one pixel-pretty package from Nitrome, whether it's in your browser or on your phone.

Android:
Get Silly Sausage in Meatland

When I played the original, I loved the little acrobatic flip Sausage did after a successful wall grab and retraction. It's a shame he doesn't do that in this version.

But hey, at least the dog gets to sniff butt. :P