After the success of the amazing Puzzlescript game Signal from last year, Arrogant Gamer has teamed up with Digital Synthesis to create Sig.NULL, a downloadable expansion to the Sokoban-esque puzzler. The goal of each level remains the same; you need to move the drones under your control to push boxes to the targets, but the mechanics of how you do so slightly fluctuate each time. If you've already played Signal, you might know the basic gist of the mechanics, but this giant batch of new levels with fresh twists means it's a great challenge for all takers! 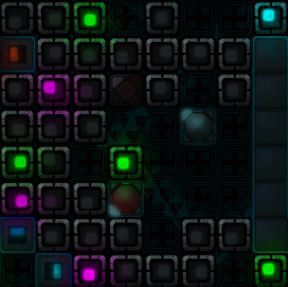 It's hard to lay out the rules of Sig.NULL without spoiling everything, but in general, you need to cover all of the marked tiles with boxes (and make sure they're aligned correctly). This is done using the [arrow] keys to move the colored drones and [space] to interact with objects... for a while. When things don't quite work as you expect, you'll have to start toying around with cause-and-effect to sort out why the controls handle as they do. For veterans of Signal, this is nothing new, but new drone types equipped with special powers mean there's still quite a lot of untouched territory to explore. If you get stuck, you can usually use [Z] to undo moves or [R] to reset a level.

And speaking of exploring territory, Sig.NULL adds a new overmap system which allows you to explore multiple paths through the levels; if you get stuck on one level, back up and try a different one. Levels are generally grouped by the new mechanics they introduce, but they can loop back and merge with other paths to unlock more advanced puzzles (and yes, the original Signal levels are hidden in their own path). If you're the sort of player who likes to read the readme file (hint: DO IT), you might pick up some clues for some of the quirks this game has to offer.

Unfortunately, Sig.NULL is just as colorblind-unfriendly as its predecessor, if not more, considering the addition of more colored drones to wrestle with. The generally dark appearance makes some objects difficult to spot until you learn what you're looking for, but it sets up the mysteriously techy atmosphere well. If you're ready to resolve some computational conflicts while discovering the mechanics that might well have made them, give Sig.NULL a try and get ready for a truly puzzling experience.

As soon as I try to play a level, I get the following error, then the game crashes:

I'm running this on Windows 7. Am I the only one getting this error?

Getting the same error, alas.

From docs on GameMakerStudio:
"NOTE: Although most modern PCs ship with DirectX 10 and higher, this does not mean that DirectX 9 is present on your machine, and you should still install it..."

Wah! I suppose I understood why this error really is. I'll fix it in few days.

One thing about DX9. If you have modern PC and game crashes before main menu - it's about DX9.

If game crashes on level start - i'll try to fix soon. There is no DX fault.

I downloaded this again and it is working for me now, and I have to say I am seriously impressed.

You should be able to transport 4 blocks up and left with the orange cell limit, as well as nudging them at that 4 target square; this is not very hard, just requires some trying.

The trick is, as you can see, there's still some extra space for the red cell to go down, which means you'll have to fix the two bottom block's orientation after placing all block in their place, as well as matching the orientation of the top 2, by going down there at last.

Release 2 green cells before you move all orange cells to the top... And the rest is just nudging. Lots of nudging. Keep trying, and eventually it should be okay.

When you push the right block to the far right, the left block is just enough for your right blue cell to push up. And did you see that purple cell? This is important.

As you place the blocks to prepare for the push, use the purple block to block the right blue cell, as well as nudging the green cells to their original position (to make sure the left block can enter above them).
Make the push: move two blocks all to the far right, and then push the left block up. You should be able to see that if you now rewind, the left block will rewind back above the green cells. And with it at the right position, the rest is fairly easy.

p.s Missed something for Short Circuit, since recalling from my memory is not enough:

Also, due to the fact stated in the last comment, there's another trick: before moving the other 3 blocks up left, move that lone block left, get a block on the top right target first, and push the remaining 3 blocks right 1 time to nudge all of them in position, as well as matching the orientation of the top 2. (That's why that lone block's pointing at the top left!)

Thanks for the hint on NW/One Way, I was stuck on that one also and the explanation helped. I'm currently stuck on Time Lock and STLR. Any chance of assistance with one or both of those two?

If you destroy something via the yellow cell, and then by the power of blue cells, somehow rewind something else on top of it at the same turn it disappeared, the thing original there will be gone forever once you unwind before the point of destruction, unless you reset the level.

This would also be the key technique to solve the level next to it,

, so better learn it here first.

Nothing hard in this level. The only trick here is that you have to think about which target to head with first. If you push blocks to some targets first, those other targets may become unsolvable. With brief planning, it's actually quite easy.

Thank you for the hint on Time Lock.
On Stealer, my problem is

I can't see the third receiving square. The two in the box with the red and yellow blocks are obvious. I feel like I've blown up every accessible wall and moved every moveable blank block in my search. Moving the three blocks wherever is, as stated, nothing complicated... I just don't know where to move that last one.

Check the far right side :P

That's good advice! I'm so happy to see that there are people actually figuring these tricks out.

"If you get stuck, you can usually use [Z] to undo moves"

There was so much frustration when I realized why "usually" was in that sentence. This game never fails to surprise.

Wow, that was quite a bit of fun, and very challenging too! I've only got Short Circuit (and the one that comes after it) incomplete, so with a bit more trying, hopefully I can get that done...

It's been a month, and I've finally tried again a bit. And... out of luck. Anyone got any more hints for Short Circuit? I'm really stumped on this.

Sorry about my double post, and sorry that my reply is a few weeks late, but for PPLR PTH:

I assume you know where to get the yellow box:

to the square in the bottom right

and that you know how to get it there. I'm guessing your problem is that the green boxes are in the way? Just guess and check your way through, and pay attention to what's moving what. Shouldn't be too hard :)

Third comment in a row :P I've now finished Short Circuit, but on a different computer than before. Now I have to redo RCNSTRCT and Tail Cutter, both of which are very difficult :( I've done them before, but it's just kinda annoying to have to try again. My patience is really being tested :P