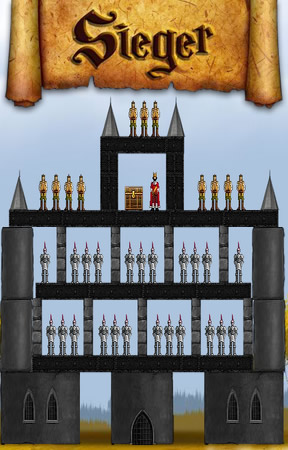 Ah, destruction. Who doesn't love it and the multitudes of games devoted to it? But, you know what they say about too much of a good thing and moderation. My point is that sometimes you need to destroy with a little restraint. That's the take-away lesson in Warspark's Sieger.

Inspired by Crush the Castle, Sieger has the same central conceit. Use your mouse to target parts of each fortress so you can bring it down and take out the people inside. Sieger does do things differently, though. Most noticeably it removes the catapult, instead you face the castle from the front and your projectile goes precisely where you aim it. Remember what I said about restraint? You can't just destroy everything you want, because on some levels you must avoid killing hostages, people with exclamation points over their heads. They're just as vulnerable to instant death by being jiggled into a wall as the bad guys, so you'll have to be careful.

There are three varieties of projectiles, a normal projectile, an explosive projective, and a diseased body projectile. The latter doesn't do as much damage as the first two, but it spreads a cloud of poison gas that takes out everything in its radius. On some levels you have a limited number of shots, but try to use as few shots as possible regardless in order to get the highest score and a nice shiny gold mark. 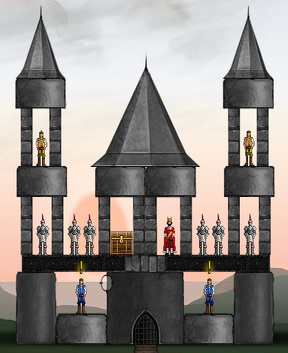 Although it would be easy for Sieger to simply copy the mega-popular genre-maker, Crush the Castle, instead Sieger stands on its own and carves its own place in the genre. Some will miss the timing challenge of releasing the catapult in CtC, but others will prefer the more relaxed gameplay. It's especially nice that the levels are based on historic events and progress chronologically from the Warring States era of China to the Italian Renaissance. A minor quibble: it'd be nice to have a button that goes back to the level select screen without having to go back to the main menu. Once you've had your fill of the regular levels, try some of the player-made levels, and don't forget to try out the Castle Builder, where you can use pieces from all four eras to create and share a fortress of your own.

joye - When I first saw Sieger, I thought "Oh great, another Crush the Castle clone." Once I started to play it, however, not only did I see that the makers of Sieger were upfront about their Crush the Castle influences (they thank the makers right in the credits), but that they had literally turned the game around and given a brand new and super fun puzzle experience to the player. Instead of launching from the side and needing to click to release the projectile, you shoot from the front and the projectile goes exactly where you want it. This completely changes the mood of the puzzle, making it about precision, not timing.

If you've ever been frustrated by a level of Crush the Castle, where you knew EXACTLY how you needed to hit the castle to make the thing topple, but you just couldn't seem to click at the right moment, you'll find Sieger a welcome relief. At the same time, you can't stumble into the right answer like you can do sometimes with Crush the Castle, and because of the hostages, you can't just keep hurling your strongest projectiles at the castle to make it fall. To my mind, this makes it a more pure puzzling experience. I loved playing Crush the Castle, but I actually had even more fun playing Sieger.

Anyways, it was a great game, and I had lots of fun playing it. Really surprised when I saw there were China levels.

So, in thirty words or less: Crush the Castle crossed with Red Remover, by way of Demolition City.

Personally I would have preferred if the different building materials had different strengths. Seems like everything shatters like glass. And then there is the issue of ammo. I think the puzzle element could have been even further enhanced if, for example, the biological warfare weapon did no structural damage. Or at least less damage. Seriously, talk about hard headed.

I liked it, but thought it was too easy. I finished about a third of the levels with one click on my first attempt.

cevgar-- the different materiel do have different strengths; later on the darker iron takes more punishment, while the stone is much more brittle.

Otherwise, it was fun, but even though I'm no ace at these, this one was pretty easy for me.

I thought it was great fun, having never played 'Crush the castle' I was able to take a fresh look on it. Now I will be giving that game a go!

Loved the game, even though it was dead easy. The "gold" requirement should actually be the regular requirement, and even then the game would be a cakewalk.

Still, a very entertaining distraction, if a little sadistic. :)

Sieger is a definate twist on the CtC idea, but I've noticed a few small items that could be addressed.

When playing the game, especially during a 'level reset' or even when advancing to the next level, the game has a habit of freezing. This requires the game to be reset. Even though you can pick up where you left off, it does get to be a pain.

No 'new game' option. After making it completely through the game, you don't have the ability to 'start all over' and try to better your score.

No 'previous level button'. We all know that when playing games like this, we develop an affinity to certain levels; whether they're especially easy, or tricky enough that we want to be able to try different approaches to beating them. Having a 'previous level' button would definately be a plus for this situation.

Statistics: After successfully beating all levels and opening all the treasure chests, after the final level, it said that I had only looted 27 of the 29 castles....what gives?

Ultimately, it's a great game; and if these 'glitches' could be fixed, it would make it that much better!