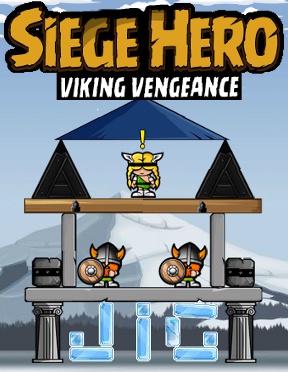 Polished to a shine and featuring over 150 levels, the original release of Siege Hero (a spiritual companion to the browser game Sieger) for iOS devices has been an easy way to whittle the time away throwing rocks at conquering warriors. Now, browser-based fans of physics games can join in on the fun with the release of Siege Hero - Viking Vengeance, a port of the first few dozen levels from the iPhone/iPad release with one epically awesome bonus: a level editor and community-made content!

Siege Hero - Viking Vengeance is easy to understand. All you have to do is click the screen where you want to throw a rock and let gravity do the rest. Your plan is to give all of the bad guys a good bump on the head while leaving the innocent peasants alone, causing as much damage as you can using just a few pieces of ammunition. Naturally, as you progress, more tossable things become available, such as bombs, barrels of boiling oil, fire potions, etc. You get a ton of points for unused ammo at the end of the level, though, so if you're shooting for the gold crown, conserve!

Now for the real reason to get excited: user content. "People's Empire" on the title screen opens a menu that allows you to browse levels submitted by other players. Browse by date or popularity, and track favorites as well as check out your own creations. There's already a healthy serving of Siege Hero goodness to be found here, and as time goes by, it'll only get better. And wackier. Some of those stages are just pure insanity!

The Castle Builder is where you could really lose your afternoon. You're given access to every material in the game and can construct things as simple as a two-tiered fortress to a catapult that flings exploding barrels. Best of all, the editor is extremely easy to use, and after a few short minutes you'll be crafting like a pro. Save, edit, and tweak your creation, then upload it for the world to see!

Siege Hero - Viking Vengeance has all the depth and realistic physics of its iOS brother, only now it's in your browser. There are only a small handful of developer-made levels to see, but with the avalanche of user-made stages, you won't run out of structures to siege any time soon. And if you do, you can just build your own!

Hmm... get to Level 6 and my bombs don't affect the bridge and it gets stuck in constant "recharging" mode. Time to update the flash player perhaps?

Level 32 has me stumped, hoping that by posting this I'll figure it out.

Nope, no joy. I can see what look like little wooden pegs at the bottom of the tower, but can't hit them with fire. I really can't figure out how to do level 32 in two shots, all the rest are a breeze.

Burn the wooden plank on the right, then oil the top left viking. It should tip over and the little black square should roll down and set off the explosives.

There's a bug that makes the interface at the bottom disappear from time to time. Nice game though.

Nice game, professionally presented, but perhaps rather too easy. A few more tricky levels would have been welcome.

Fun game with great polish - I am a sucker for these siege physics games but this one's really nice.

As always some levels are surprisingly easy and there's always the trick that some levels are built specifically to show off the level design (okay, I'll hit this thing for it to swing into that and blow up...sure) rather than actual puzzle solving, but that didn't really detract from the experience here.

I too got the bug where the HUD would disappear sometimes when switching away from the screen and back to it, but it always came back when I restarted a level by pressing R.

@Danath, thanks so much, I don't know why that solution was eluding me as it's so logical!

@Smoothfonzo, same thing happened to me too, don't know why. Almost every level I lost the borders (bottom and right hand side) once the level started.

Am I missing something or is there seriously something wrong with this game's system for checking whether or not you've failed the level. On level 24 it keeps saying "LEVEL FAILED" almost as soon as I fire my third shot, even though in the background I can see the towers topple and the vikings die. Is there some instant loss condition in this level that I'm missing?

This was a fun game. thumbs up!

I am having the same problem on level 24 as Regy Rusty is having. I have seen all three men fall and turn to skeletons and it still says "failed".

on the 6th level i fire at the bridge but it dus not break any suggestions?

I cannot get past level 26. I checked the video walkthrough and am doing the same thing, but it keeps killing the girl, too. Any help?

Take out one of the wooden arms with your first shot and then aim the barrel at the little circular grey dot at the bottom of the stone. You'll see what happens...