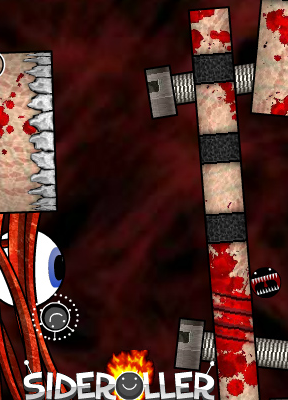 Jesse Sternberg's Sideroller is a puzzle platformer, but it's not kidding when it says it has "unique mechanics" and "unique level design." Imagine And Yet It Moves with smooth world tilting instead of 90 degree shifts, and instead of being a little dude, you're a little ball, so your big choices are to rotate one way or another way, except you also have a fire charge skill and you can stick to walls and you can shoot lightning and also drag scenery... yeah, this game throws a lot at you VERY quickly. And we haven't even mentioned turning into a chicken yet.

Take your time and really get it all straight as you go through the tutorial level, because the difficulty is going to ramp up fast. The game offers customization of the controls, but let's just run through the standard option to get the idea. [A] and [D] roll you left and right, while [Q,W,E,S] send you on a fiery smash. Hit a smash key twice for an ultra smash. Hold [shift] to become sticky and cling to walls. Use the mouse to move the camera and to pick up and drag objects around. And at the bottom of the screen, an energy bar will refill slowly. You can draw from it to shoot lightning with a click of the mouse. And that's not even touching the special abilities you can get when you get a power-up. 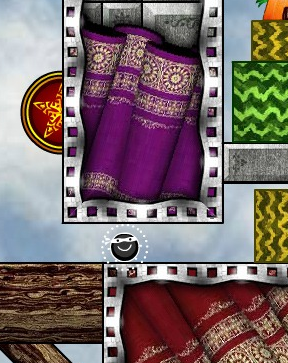 Analysis: Sideroller wants to do it all. It's great for games to be ambitious; the only snag is that sometimes people don't want to invest quite as much in a casual title as it requires. If you're willing to put in the effort though, Sideroller will reward you in spades (and also hearts, clubs, and diamonds). Devotees of high difficulty titles jonesing for their next fix of delicious frustration will be able to indulge themselves to the utmost in this one.

The customization is impressive and helps to make the game's difficulty level more fair. You can not only choose between right and left handed options, but tweak the keys however you like, so if you're playing with a nonstandard keyboard, you can still join in the fun. The game also features additional secrets like hidden coins to collect if you're so hardcore that the normal challenge isn't enough for you. And even if you don't think you've got the skills to beat the game, you should at least try the tutorial to enjoy the excellent art.

This game really reminds me of LittleBigPlanet. Pretty cool.

I'm stuck on the "Coin Maze." Up until this, the game was dazzling. The art is superb, and I love platforming through these worlds.

Never mind, I just figured out the Coin Maze is optional :P

Then I lost my bird power, not sure if I can escape the level now? Anyway, neat game!