Mads Anderson's new title, Sideomorph (that's pronounced Side-o-Morph... we think), is a puzzle platform game that's all about the box. You're a little miner dude, and it's up to you to get to each treasure chest and gem in each of the twenty cubed levels. Use the [arrow] keys to move and jump from floor to floor, up or down, pretty standard platforming stuff. At least until you use the [A] button to push at the side of your cube, tilting the whole thing sideways and changing the layout of the level! Similar tilting mechanics have appeared before in games like Climbo, but it's pretty rare to find a game that puts you INSIDE the world that's been tilted, letting you watch the game world as a 3D object in front of you. There are also springs, the odd enemy monster you have to avoid, and some bonus collectibles that add some challenge and replayability. 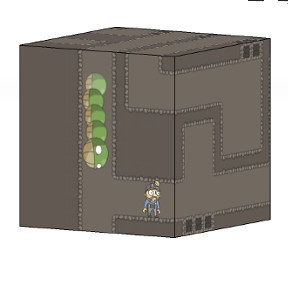 Sideomorph is one of those browser games that reminds you there's still plenty of room for platform games to grow. It's a simple enough mechanic but it breaths tons of new life into the "jump here, jump there" formula, and Mr. Anderson has certainly gone the extra mile. The game could have been a cute diversion, but the addition of bonus artifacts to discover and a hub world with more than a few secrets to unlock makes the game downright compelling. You'll likely find yourself with a bad case of "one more level-itis" as you try to get that one hidden gem that's eluding you. The monster levels are also a fun change of pace. Scampering about with a giant green worm monster nipping at your heels is a memorable experience. It's fun stuff all around. Give Sideomorph some love.

This reminds me of Cardboard Box Assembler; the two games have very similar mechanics

How to enter the levels, after the tutorial. I go to the gear puzzle at the main hub, but no matter how I move the cursor or press a, I can't proce.eed. I am stuck. :(

I found it nevermind.

Looks like it'd be a fun game but I can't even complete the tutorial or the first level. Is there another command I'm not seeing? Tried every keyboard button. I end up pushing over the sides (A button) only to eventually become trapped.

For some reason, this game reminds me of Sequester - granted, I've never played Cardboard Box Assembler, so I wouldn't be able to compare it with that.

To beat the level 6 boss (the worm), jump over its head and land on its tail. It takes 4 hits to kill it.

There is a subtle point to the mechanics that took me a while to pick up on.

The cube has a down, and you have a down. These are not necessarily the same. The bottom face (from the cube's perspective) is inaccessible, so you can wind up creating a floor where the transition between two faces was. However, if the face which is down from the character's perspective is not the bottom as the cube sits, you can still fall from one face into another. Awareness of this is necessary to get some of the extras.

Your up and the cube's up are only allowed to differ when you're on the cube's top. If you go to the top from one side and leave from another, your gravity suddenly flips around. I should either always have my own personal up, or I should always use the cube's up. Puzzles need internal consistency.

"The page you are looking for cannot be found."

That's what i get when I click on the 'Sidemorph" link in the text.

It looks good, but sadly it's a bit laggy for me.

This game is absolutely amazing - whoever designed it must be a spatial thinking genius. I'm usually pretty good at these games, and I had to use the walkthrough on probably 2/3 of the levels... crazy!