Today, a shopping strip with a Dollar Store and a nail salon... tomorrow, the world! Literally, because in Little Giant World's adorable sim game Shop Empire 2, the only thing itty-bitty are the graphics as you work to build a consumer empire that spans the globe. In each country, you'll be able to build the mall of... well, not your dreams, since what puts money in your pockets is what the customer wants. Book stores, salons, pharmacies, groceries, even entertainment halls to hold exciting events and more can all be built if you have the cash... and the additional dough to hire the staff to run and maintain them. Just make sure you have the facilities you need to handle celebrity customers... and the staff to take down prowlers! Because apparently 80% of, like, any given country's populace turns to a life of crime when the lights go out. Seriously. People are jerks. 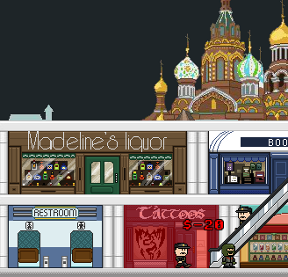 The game's tutorial assistant will walk you through the basics, but once you familiarize yourself with the game's menus, everything is pretty simple. Build things with the money you have, and keep your customers happy to earn more. Your store runs on a standard 24-hour schedule, with customers and most staff appearing during the day unless you tell them otherwise by changing their hours, and the shops closed at night... during which you'll want to make sure you have security employed to keep an eye out for shady burglars! If time is passing too slowly for you, you can use the buttons at the bottom of the screen to speed it up a few times. Both your staff and your shops can be upgraded to increase various stats and effectiveness, though while your stores can be upgrade anytime with enough cash, your staff needs to have their experience meter full before you can promote them. Complete all the missions for each country to unlock a new one to play in, and new things to build. You can even transfer funds between malls!

Shop Empire 2 feels a lot like Kairosoft's Mega Mall Story in the way you build and play, even down to the random celebrity shoppers with the goofy parody names. It's a gorgeous little game with its detailed environments, and there's something undeniably addictive about its simple yet charming approach to casual simulation. On the other hand, it does feel like it's missing something to keep it from getting repetitive after a while, with grinding through days for cash taking up the majority of the gameplay. (Fortunately, the game doesn't autopause, so if you're lazy or, say, need to write a review while you play, you can let it run in another tab or window while you do something else.) As a result, it's a cute, fun game, but potentially a bit too simple for some players, or even a bit too clunky with its multitude of menus and the way the tutorial glosses over some of the finer points you'll need to figure out for yourself. But with upgrades, new shops and new locations, and achievements galore, if Shop Empire 2 gets its hooks into you, you'll be feverishly sweating over your profits and dirty toilets for a long, long time. Uh... it's... more appealing than I just made that sound. Trust me.

Definitely a bit buggy. Caused the adobe plugin to crash on me while in Russia, and lost my autosave. Perhaps saving manually will help? Not sure what triggered this.
In India, I accidentally tried to upgrade a bookstore when it was already at max level. This caused all my money to disappear, and now the mall does not accumulate money- customers come and spend, but the balance of zero does not change.

When I had gotten it, it didn't register. Also, the expenditures/income window didn't show up. I refreshed the game and everything worked fine, though.

9 security, 1 elivator, EVERYTHING on second floor or above.

and still the security can't catch the crooks.

Yup, over 24 hours of upgrades gone after being "autosaved". And I have plenty of memory allocated.

Is the file resized incorrectly on JiG? I'm on highest quality but there's a weird fuzziness that looks like it's badly sized.

There is room for a walkthrough, namely which shops are compatible with each other, i.e. they give bonuses. There's no indicator I've found besides a thumbs-up or -down when you build. I guess you could try every single type against every other type. There's some in hints like

Don't put a restroom next to the food.

And interestingly the little people on the terrace will spew game hints. If you want a better coverage,

build up rather than horizontally, and assign staff to certain floors. They're restricted by how quickly they trudge back and forth. Assigning shifts means their stamina will last a bit longer.

Much better staff than Resort Empire!

Different crowds will have different tastes, but it's sure *interesting* to watch popularity levels of steak in India and liquor in Arabia.

In addition to my comment above, the game glitched for me in Britain, the last level, and stopped updating my statistics each day. Because of this I'm stuck- can't complete the "make $X profit" mission, and therefore unable to beat the game. Frustrating. Reverting to an earlier autosave didn't help, neither did refreshing the game page.

Try to go in another country..

Got the same problem when went in arabia and made money transfert.. day didn't update so no money, went to russia, waited for next day and was ok then..

Thanks, that fixed it.

Has anyone else had a problem loading the game? I get to a screen with a dozen guys bobbing up and down, and it asks me to set my local storage to maximum, which I've done. Thanks for any help with it!

I somehow ended up with NaN dollars in one of my cities, after getting most of the achievements. Oh well, guess I'm done with the game!

@Chipunk
Same its just an bug
TIP: Save every new day in the game

how can I save the game?
because when I restart my laptop
my saves is gone
Please help me :(

Journey in the Mine

5,092 Views
3 Comments
chrpa— Jayisgames needs your help to continue providing quality content. Click for details It's been four years since we had the opportunity to enter the wonderful world of Jo99 and Kronsilds. Now they're back with a beautiful and touching story about...  ...