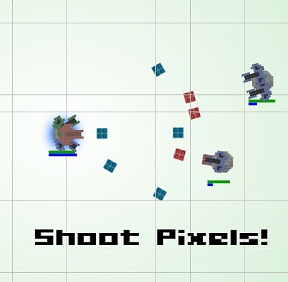 Maybe I just have Tron on the brain, but the premise to Shoot Pixels, Irsperanza's new top-down arcade shooter feels a little familiar. A mysterious messenger from a world inside your computer with graphical resolution no better than a Coleco informs you of an ongoing war... a war that the messenger's people are losing. The enemy's tanks are growing ever-larger, and ever-stronger. Time is running out. Only you have a chance to succeed in building your own super-tank, eliminating the enemy, and saving the pixel world. Help them, person at the computer, you're their only hope... Okay, so it doesn't quite have the dramatic gravitas of The Last Starfighter, or even the Nick Arcade bonus round. But at least it's a lot of fun!

Naturally, if you want to fight a pixel war, you'll need some pixel weapons, and Shoot Pixels offers a number of pixel tank options for your pixel pleasure. You start by dragging and placing guns upon your tank base, and selecting which wave of enemies you wish to face. Once in the arena, you control your tank's movement with the [arrow] or [WASD] keys, and fire by clicking your mouse. Defeating a wave of enemies give credits which can be used to upgrade your tank to your preferred specifications. Maybe you want enough guns and weapon energy to fill the screen with bullets. Maybe you want to beef up a single gun into a powerful sniping tool. Maybe you want to beef up your armor to turn the tank itself into your weapon, or any manner of hybrids. The inclusion of the pretty well-balanced "Weapon Builder" system allows for some interesting combinations, though a few pre-made weapons are available for use. Now go out there and fight that war!

Overall, Shoot Pixels's content outstrips its polish. While this is undeniably better than the alternative, it makes for something that feels a bit more like a demonstration of a game engine, than a full game in itself. Even if you find this to be the case, however, it's worth noting said engine is incredibly well-made and makes for button mashing fun. The game's customization options, particularly the ability to modify the placement of the guns upon on pixel tank, make for an undeniably creative twist on the upgrade shooter genre, though more non-gun related upgrades would have been nice. Shoot Pixels has a solid base that would probably be best served by a sequel to build upon its strengths. Still, if you might enjoy enjoy skulking around an arena, dodging bullets, seeking out waves of baddies, and upgrading a puny starter tank into a mighty juggernaut, Shoot Pixels will make for some high quality low-rez action.

Did this glitch happen for anyone else? I made a custom weapon with everything maxed out, the most expensive thing I could make, as a joke, of course, and when I clicked it, it disappeared. I tried dragging it to my ship, while "invisible", and it gave me the equivalent of it's cost.

I stopped playing after that.

I just tried what you described, and it worked. I think you accidentally deleted the original weapon by having "Delete a weapon" highlighted. Still, that is a serious bug.

Let me just say that I've been playing this all last week when it came out and I really do love it. Sure it could use a little balancing and some UI art/qa polish, but it's so enjoyable I've actually played through the game three times. The pacing is very well done which makes everything feel achievable. If you can't beat a level, go back and grind a bit on easier levels and upgrade/buy better weapons.

First time: created balanced weapons as I learned the game(weak & slight homing paired with strong & no homing)
Second time: maxed out homing with very weak and high fire rate weapons (you can make this as a 1k weapon, needs some balance in my opinion).
Third time: as the game suggested, you could completely focus on defense and just ram your opponents. It's difficult, but it was enjoyable enough for me to play it a third time through. On this game I also discovered how fun it is to just have a ton of max'ed damage weapons pointed in all directions.

Overall, this shooter had me playing way more than the average shooter.

I couldn't truly play this well with my laptop touchpad, but I was able to run around in circles with a homemade homing weapon and fire randomly until everything was dead.

That said, I jump at the customizable weapons but got tired in the way that I ended up playing it.

I agree that it's a good basis, but I found it to be extremely buggy--the movement keys occasionally stopped working, and it sometimes wouldn't actually create weapons. Maybe I'm the only one this happened to; I don't know. But it was kind of frustrating.