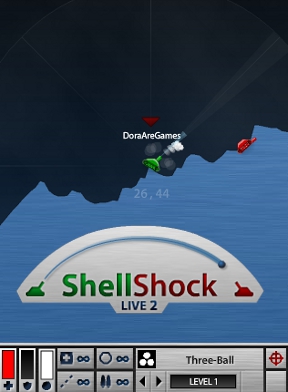 If an interviewer with a camera were to stop people on the street and ask them the question "If you could have one wish, what would it be?" the answers would be the usual range from "A million dollars" to "Peace on Earth". However, most of those folks would be lying for the camera, because for many the answer would really be "To be able to drive a tank and blow things up," at least for a certain segment of the population, like those who dream of taking a tank on a rampage through suburban San Diego or points beyond. Last year a great live turn-based multi-player action game answered the prayers of those few and proud with that dream, and now a sequel has brought back the tanking madness with Kyle Champ's ShellShock Live 2!

Like its predecessor ShellShock Live, ShellShock Live 2 (ShellShockier?) is a multi-player strategic arcade-style shooter wherein the players command tanks and basically blow the living heck out of each other. The tanks are back with more weapons, more landscapes, more modes, and more explodey action. It's not just the new and goofier weapons that make ShellShock Live 2 even more fun than its predecessor (personal favorite: the pi�ata bomb), but the new types of gameplay that have been incorporated. Fight as a team or create a free-for-all where everyone is the enemy; play for points or compete in a deathmatch; or have everyone shooting at once as opposed to individually, the choices are endless. Live chat allows you to talk trash to your fellow players as you try to annihilate each other across the changing landscape.

Kyle Champ has taken everything that was great about the original ShellShock Live and added more. Players can create their own logins or use the ubiquitous Facebook. There are micro-transitions within the game, but they are unobtrusive and unnecessary to having a rollicking good time. Playing for free simple means you need to gain experience in the game to level up to some pretty amusing and devastating weapons and considering how addicting the gameplay is this won't be a burden. Let that familiar, throbbing soundtrack wash over you as you wipe out your enemies (and your friends) with this fantastic artillery game!

I played this when it was first released and hated it. It's like learning a completely different game from Shellshock.

Strike the first: Allows and give bonuses to Facebook sign-ins.

Strike the second: No single player

Strike the third: None, but the first two are deal breakers anyway.

I have 50 coins so i can get i weapons pack. Can you please give me a description of each weapon, like damage, effects, etc.