I know we're supposed to believe that witches they were persecuted and women power and love the Earth, but darn it, Xander, it's pretty compelling evidence to the contrary when it really was an evil witch that ruined a perfectly good part in FlashTeam's puzzle platformer Shape Shifter. A mouse, a rabbit, and an elephant were all just hanging out in their best clothes when a witch showed up and cursed them all into one body. In each level, you need to use either [WASD] or the [arrow] keys to move and jump, and the [1], [2], and [3] keys to swap between characters, each of which has their own abilities. The elephant can smash through big obstacles, for instance, while the mouse can fit through tiny paths and... eat cheese, apparently. Let me tell you, if eating cheese is a special talent, I am going to get one heck of a Cutie Mark. Collect the stars in each level and make it to the exit, but beware of monsters! 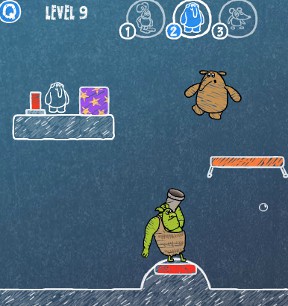 Basically, Shape Shifter is Baby's First Trine, with its body swapping mechanic, only a heck of a lot more charming. The goofy, friendly cartoon style is pretty darned endearing, with each character not only having their own idle animations, but their own ways of going through the exit at the end of each level. While you can mute the music and sound effects separately, the music itself is sort of weirdly sporadic, appearing and disappearing whenever it feels like it. "Bizarre" is actually the word of the day when it comes to Shape Shifters, with its "boss levels", swarms of angry flies, and crazy menagerie of gameplay elements. It's actually pretty creative, making you want to keep playing to see what gets introduced next. Like a lot of games more or less eying kids as their target audience, Shape Shifter's difficulty curve is really more of a difficulty slope, since, despite its occasionally "loose" controls that make fast precision movement awkward, the game is relatively toothless for a long time. Still, Shape Shifter is an inventive little game whose style (are we sure that's an elephant and not a bipedal anteater?) goes a long way, and makes it a fun, yet simple, little platform game with character.

how the ending was nothing but a big sequel hook. It almost feels like they forgot to include some levels after the end cinematic.

I don't very like it : there are hug copycat of the series "3 pandas" and the two games "paintworld". :(

God but this is awful!

I hate how it decides "You MUST use THIS character!" & then kills you if you don't.

@shellyhearse -- I don't see the 'copycat' aspect at all in this game. The characters are totally different (and cuter!). Any game made is usually going to have some characteristics that resemble other games, and bearing that in mind, one could say "3 Pandas" is a copycat of "Home Sheep Home."

Considering 3 Pandas is a point-and-click puzzle series where you lead three pandas through areas by clicking things in the right order, and this is a puzzle platformer where you swap between three different animals in the same body with their own abilities to fight bosses and evade killer bees, I respectfully disagree that one has anything to do with the other beyond three animal characters. :) I'm especially confused with the accusation about it being a ripoff of Paint World, since that game is about shooting paint blobs around to make them the proper colour and then matching them up together... besides, it's even by the same developer. ;)

I'm not sure what the third commenter was referring to when he said that the game forces you to use specific characters. I went through most of the game as the rabbit, only rarely having to switch to one of the other abilities--which I found disappointing. In these sorts of games, the puzzles are supposed to require you to figure out how to use all of your abilities together, not let you double/triple jump past most problems. (Level 6 is especially egregious in this, since it explicitly tells you to switch--but the rabbit is fine on his own!)

And if we want to call it a copycat, we should at least point back to the old Gobliiins games...but at some point, you just have to declare the "three creatures with unique abilities having to work together to solve puzzles" to be its own sub-genre, and evaluate games based on how well they follow--or choose not to follow--the conventions that have been established over time.

Well sorry. I am french and have a very bad english sometimes! ^^'

I just wanted to say that some elements of the game was very inspired by these two games (like music debuts levels or green creature). :)