Much like its predecessor, Bikas.net's latest puzzle game, Shape Fold Animals, is best described as 2D origami. This game, which is available for both browser and mobile platforms, has you folding polygonal shapes that are connected by hinges to form something that sort of resembles an animal. The resulting shape is not always clear - it could be a turtle, a chimp, a giraffe or some kind of bird, leaving you to use your best judgement about which direction each chunk needs to get folded. The game falls pretty squarely under the casual banner, since there's no lose condition and no real urgency to win, but it's still fun and extremely well-made, a fun treat for any casual puzzler on a coffee break. 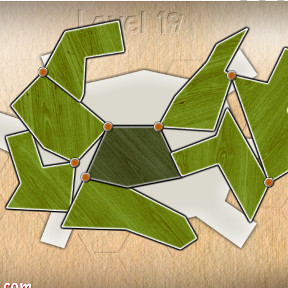 Shape Fold Animals is one of those zen experiences that casual games do so well. Whether you're resting in between homework assignments or chilling on the train, Shape Fold Animals is ready to soothe you with each satisfying plunk of a successfully placed shape. The game is best experienced with a mouse or a finger on a touchscreen. Track pad users may find the interaction with shapes occasionally finicky. The game feaures sixty levels of shape folding magic, more than enough to keep you occupied through the next hundred commercial breaks. You'll likely blast through the first ten or twenty with little issue, but don't worry, it gets much more challenging when the game starts throwing dinosaurs at you. Five or six simple polygons turns into ten, fifteen, twenty, until suddenly you have a big mangled mess of hinges and shapes you need to make sense of. So check out Shape Fold Animals and get folding already.

What is the animal in level 15 supposed to be, a Doduo?
Oh, no, wait, that's a chimpanzee. The top two appendages look like heads.

I liked it -- a fairly easy game, but it's just right if you want something soothing and pretty to play with.

Would be good for young kids, I guess? And might work better on a tablet than with a touchpad. Slightly annoying that pieces keep moving around even after you get them in the right place.

Awesome going, Bikas.net! Your Shape Fold games never fail to catch me up! I liked the fact that pieces permanently locked in place in SF2, and I love that this game took that a step further, and locked them in place temporarily. Also, I noticed that you can (technically) grab a hinge to fold the shapes in this one, cause that's something I always wanted to do! XD The game is equally as fun as the first two, and the theme of animals is a nice touch. I always wanted more levels, and this one having 60 really delivers on that spot.

The music could still use a little work, though. It fits, but it's a bit annoying

Looks really cute, but I can't get it to load! Tried in Chrome and IE, just get a perpetually spinning wheel in the top right corner. I let it load while I was working on something else for 5-10 minutes, came back to this game, and the wheel was still spinning. Thoughts?

Fun. It suddenly got a little bit difficult around level 56 or 57, when there were many many small squares.

damon,
The temporary lock is nice. The permanent lock in the previous added a level of difficulty, but there is no scoring so it was unnecessary.

I agree on the music. Maybe it needs a few more beats or a few less of the same ones.

I love that this is mobile. It gives me that game I was looking for to play on the side to keep my hands busy, but not my mind. Also the mobile means less hand work, no holding that mouse button or touchpad down to move things.

It played a little slow and crashed here and there but I think it needs more than my inexpensive device. It still played okay, I just had to do a few levels at a time. I Think it had something to do with so many pieces moving and interacting at a time. The game was still enjoyable.

Little Witch in the Woods Is an Adorable Pixel-Art RPG, Out Now on Steam Early Access

1,154 Views
0 Comments
jayisgames.com— Little Witch in the Woods is a retro RPG with a slickly executed pixel-art aesthetic. It's currently being developed by a promising young Korean studio called Sunny Side Up, and you can buy the Early Access version on Steam...  ...